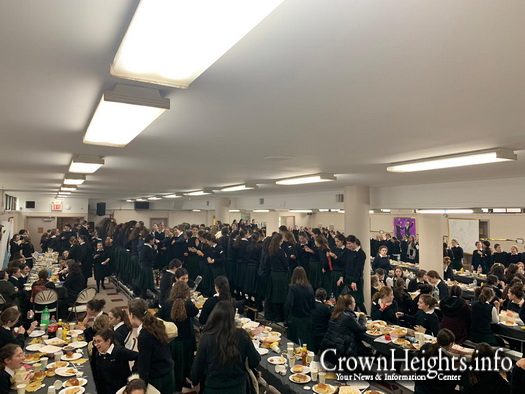 You have to experience it for yourself to really get it. To really understand what a day like Yud Tes Kislev looks like and feels like in Bais Rivkah High School. That’s really what the program was all about, experiencing it for yourself. Pulling chassidic concepts out of the books and choosing to own them and live them.

Today’s program so gracefully fused toichen with talent, and inspiration with entertainment, to create a tangible Rosh Hashana Lachassidus energy that would empower us all to inch forward in this direction. A dazzling lobby greeted the girls as they entered the school building at 8:45 in the morning. Students practically climbed through the Yud Tes Kislev decor to get to the shul, where the theme of the day was so eloquently introduced through a slam-poem and video presentation. Ki karov eilecha, chassidus is close to you. It should be something that is your very own. How do we internalize the concepts that we all seem to know in our sleep? How do we turn these ideas into the reactions that we have, the attitudes that we choose, and the feelings that our minds generate? After a powerful introduction, the girls were ready to jump into a day of focusing on this avodah.

Veering from the routine setting of their own school’s shul, the girls made their way to 770 for a very Yom Tov’dike davening. They then walked right back to 310 Crown Street, where Mrs. Ginsburg, Shlucha to Boro Park, addressed them. Her point was focused and clear: as chassidim, we strive to operate out of our nefesh HaElokis- the side of us that knows what it means to be a contributor, and not just a receiver, in HaShem’s beautiful world. We all have the ability to live selflessly, and to focus on contributing to other human beings, and to Hashem’s Will.

Then, something really different happened. History was made in BRHS. The girls learned the entire Tanya in only ten minutes! Sounds humanly impossible- but not quite impossible when each of the five-hundred girls in school tackles just one page! The ten minute clock started ticking and the shul fell silent as every girl focused on reading her part of the Tanya. When the countdown struck zero, the whole school proudly waved their portions in the air. Tanya completed! What a zechus!

Next up: workshops. Painted canvases draped each classroom with imagery that conveyed some of the deep concepts discussed in Tanya. In each workshop, the girls delved into and discussed another form of Ahavas Hashem, and how each one could be attained. The girls were then transported to the world of music, where they listened to, and explored the background of, each of the ten niggunim of the Alter Rebbe. After a full morning of thought-provoking programs, the girls were treated to a beautiful Yom Tov seudah for lunch– and Bais Rivkah’s artistic talents did not fail to make their way to the lunchroom! The place was beautifully decorated with artwork that told the story of the Alter Rebbe’s release from prison. The seudah ended with beautiful singing. Still humming niggunim from the joyous singing, the girls returned to the shul for some more learning and inspiration. Following mincha, the floor was opened up to any girl in the school who wished to share something in our “Chassidus Open Mic”. In keeping with the theme of the day, the open mic gave the girls a chance to share examples of how they used Chassidus in their lives. Through poetry, dance, piano and song, the girls taught us that Chassidus can shine through every aspect of our lives.

And then came the grand finale. Assuming that this day couldn’t get any better, the girls sat curiously as the screen descended and the lights dimmed. What they were about to see, was a film that would culminate their Yud Tes Kislev with a heavy bang. And it did. The film, titled, “Close To You”, followed a girl who had never been exposed to Chassidus, through a journey of discovering this realm of Torah that she never even knew existed. Through tear inducing humor and rich toichen, the film drove the point of the day home: we all need to really discover Chassidus, and realize that it needs to come with us when we walk out of the classroom. The girls left school on a high, thinking about how much this film really was a model of their own lives.

The film was directed by shlucha Geula Katzman, and created and performed by the students themselves. You could tell that weeks, hours, and many sleepless nights were invested in this film.

A huge thank you to Rabbi Benjy Stock for ensuring that all details of our beautiful program could be carried out to the fullest; to Mrs. Teichtel, Mrs. Blau, and Geula Katzman for overseeing all aspects of the day. And to all the Bais Rivkah students who invested their free time, talents, ideas, and energies into creating a program that is sure to keep their fellow schoolmates (and themselves) inspired in the right direction until Moshiach becomes a reality.