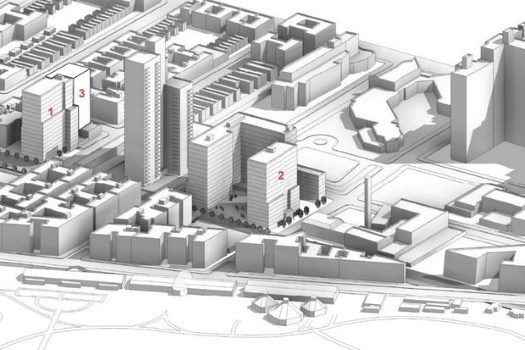 The public can weigh in this week on a plan to change zoning rules to allow two new 16-story towers with 565 market-rate and affordable apartments — a project already facing opposition in a petition from an anti-gentrification group.

A public hearing is set for Wednesday regarding the large development by Cornell Realty, which would turn two former laundry facilities off Franklin Avenue into 16-story residential buildings.

The towers, at 40 Crown St. and 931 Carroll St., would include 152 affordable units, according to the developer’s zoning application to the city.

If approved, the project would be completed under Mayor Bill de Blasio’s Mandatory Inclusionary Housing initiative, which allows higher and denser buildings if they include a certain percentage of affordable housing.

Recently, activists from the group Movement to Protect the People — which ground to a halt previous rezoning efforts in CB9 — have been organizing to protest the Cornell project. The group, now going by the name FLAC or Flower Lovers Against Corruption, has gathered nearly 4,000 signatures in an online petition against the Cornell project ahead of Wednesday’s hearing.

At recent public meetings, the group has urged residents to “come out and say no” to Cornell in flyers showing dark towers overshadowing the neighborhood and the Brooklyn Botanic Garden.

Alicia Boyd, founder of FLAC, said the “visual integrity” of the gardens are a big concern, as is blocked light and air. But the project, she said, would also bring out-of-context development and luxury housing that speed up displacement.

“This is a moderate-income community and we need to help preserve and maintain as many moderate, affordable communities in New York City because we are losing them rapidly,” she said.

To move forward, the residential project will need approval from the City Council and mayor as part of the Uniform Land Use Review Procedure.

Brooklyn Community Board 9’s land use committee will vote on the project at Wednesday’s hearing, set for 7 p.m. at P.S. 352, 46 McKeever Pl. according to a board’s notice. CB9’s vote as well as a vote from Brooklyn Borough President Eric Adams are advisory in the ULURP process.

Adams and the district’s City Council representative, Laurie Cumbo, both said Monday they will wait until CB9 has weighed in on the project before deciding whether or not to support the development plan.