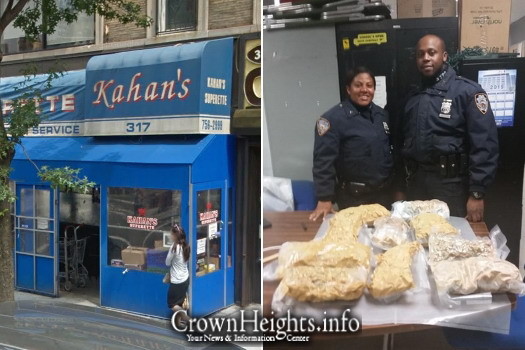 Kahan’s Superette, a kosher food grocery store in Crown Heights, found itself in a sticky situation when 10 bags of marijuana — stashed inside vacuum-sealed bags of peanut butter — showed up in the mail. A similar incident occurred at a different Kingston Ave. establishment two years earlier.

The owner of Kahan’s Superette told cops whoever mailed the mystery package must have made a mistake — because he doesn’t sell those kind of treats, the sources said.

“It wasn’t anything that they asked for,” a police source said.

The bizarre package arrived at the food market on Kingston Avenue near Union Street in Crown Heights at 4 p.m. on Monday, the police sources said.

“Wrong delivery address results in the seizure of 10 large bags of marijuana wrapped in peanut butter,” the 71st Precinct tweeted, along with a photo of the gooey mess on Monday.

The marijuana, which was delivered by the USPS, was wrapped in plastic bags then covered in peanut butter.

A similar incident occurred to a different Kingston Ave. Shop – Crown Kosher Meat – almost exactly two years ago, when the owner received a Fedex delivery of over 25lbs of distribution grade marijuana.