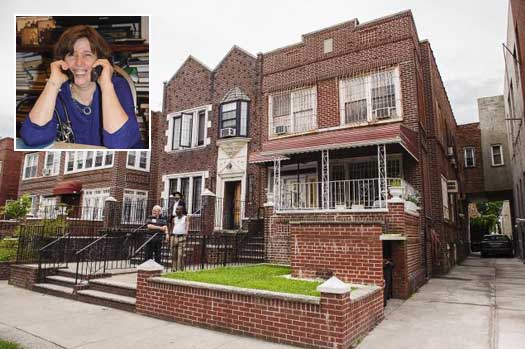 Faige Jacobson (inset) cares for homeless and indigent people in her Crown Heights home that she converts into a makeshift shelter.

She’s got the soul of a mensch, but a Crown Heights woman is paying the price for giving homeless people a roof over their heads.

Penniless characters have flocked to Faige Jacobson’s nondescript row house on Lefferts Ave. for the past 40 years, turning a modest two-story home into a sprawling refuge.

Cots and couches — and sometimes up to two dozen indigents — fill every room inside the Jacobson’s makeshift homeless shelter.

“I was born to take care of these people. God gave me a big heart,” Jacobson said. “Anyone who comes to Crown Heights knows they won’t be out in the streets.”

The 65-year-old mother of nine, and grandmother to about 40 grandkids, doesn’t just give out a donation-based sleeping space.

She feeds her destitute guests, washes their laundry, and even takes them to their doctor appointments.

Her adult children help pay the $2,000 monthly grocery bill offset by some kindly neighbors who leave weekly boxes of food outside the front door.

“We were brought up in an open house. We had to give up our beds to strangers,” said Simon Jacobson, 46, his mom’s oldest child and an investment banker.

However, no intended good deed goes unpunished. The city’s Dept. of Buildings has levied more than $32,000 in fines since 2005 after inspectors repeatedly found beds in the basement and kitchen, according to DOB records.

The Dept. of Homeless Services said people should be sent their way.

“Homeless families and individuals should be in settings where they can receive proper social services to reconnect them with community and return to self-sufficiency as quickly as possible and the city has an extensive network of resources to do so.”

The younger Jacobsons have begged their mom to close down the altruistic operation and adopt to a more retirement-friendly lifestyle.

But she won’t budge and her houseguests are just fine with that.

Charlie “Buttons” Nassofer, 69, has been sleeping on a first-floor couch for about two decades.