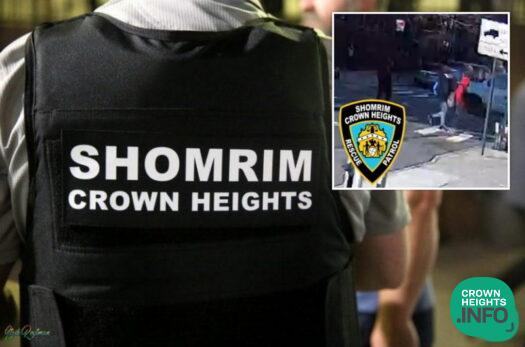 Crown Heights Shomrim has released video footage showing the moment a group of young thugs attempt the mugging of a Lubavitcher Tuesday.

As previously reported on CrownHeights.info, at approximately 2:10pm, in the vicinity of Empire Blvd and Troy Avenue, Shomrim responded to a third-party call stating that a man was in distress. When the volunteers arrived, they discovered that the incident was an attempted robbery that had occurred approximately 10 minutes earlier, and the victim was able to fend off his muggers. The victim described them as three male teenagers with backpacks. 911 was called and filed a report.

At approximately 4:00pm, Shomrim received a second call from another victim, that at approximately the same time as the first incident, a group matching the same description had brandished a knife at him and tried robbing him, but he had also managed to get away. Police were called, and the second incident was added to the investigation.

The Shomrim volunteers, using the location and information provided by the victims, were able to get surveillance footage from a nearby building, showing the attempted muggers.

Shomrim is requesting that anyone with any knowledge of these incidents please contact them.

Shomrim reminds the public to please call regarding incidents in real time at 718-774-3333.