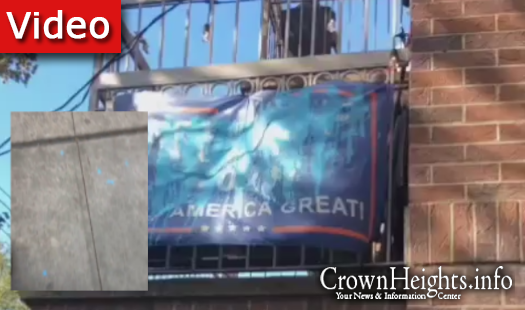 A hooded vandal dressed all in black snuck up to a Crown Heights home on Brooklyn Ave in the dead of night last week, with the goal of accomplishing his Anti-Trump mission.

The vandal, who could be seen on surveillance footage scouting out the Jewish owned home, returned minutes later with a dripping paint roller, and an intent to remain unseen. Hopping on a neighboring porch fence, the vandal rolled the paint over a Trump flag hanging from the obviously pro-Trump house.

Mission accomplished, the vandal made a quick escape down Brooklyn Ave to Maple Street, where he turned into a home and entered the basement door.

The “clean” escape the vandal made was ruined by his own design, the paint roller. Dripping wet, the roller left a trail of light blue paint drops from the “scene of the crime” to the vandals home.

The owner of the flag told CrownHeights.info that this was not the first time that the flag was targeted, with an earlier incident showing a strikingly similar figure and a crony ripping the flag with a nail studded board of wood.

The owner told CrownHeights.info that intents to file a police report over the incident.