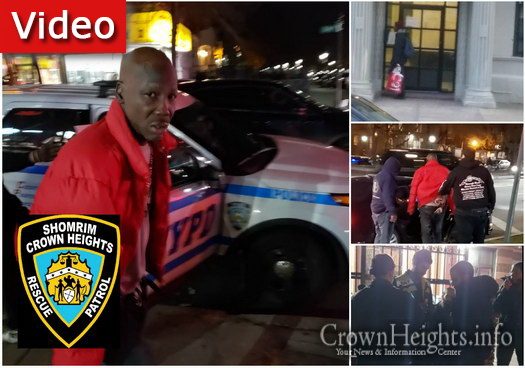 The chain of events began a little after 4:30 Thursday afternoon, as a package thief made his way along President Street in Crown Heights, stopping on peoples doorsteps to steal packages.

The thief’s method was simple. spy a package, open the package, remove the contents, and walk off.

The thief was successful until he reached the block of President Street between Troy Ave and Albany Ave.

An alert Shomrim volunteer noted his suspicious behavior, and after seeing him steal from at least one house, he called for backup and the police.

Shomrim volunteers began entering the area, spreading out so as not to be noticed while they followed the thief and waited for the police.

As the thief came away from another successful theft, he noticed the Shomrim volunteers, and quickly began making his way to Troy Ave, where he turned up towards Eastern Parkway.

As the thief came to Union Street, he attempted to dump his stolen goods. One Shomrim volunteer then found himself becoming the target as the man began to attack him. An altercation ensued in which the volunteer was bitten and was partially caught on camera.

The viral video shows as the thief takes swings at  Shomrim volunteers, hitting one in the head before taking off towards Eastern Parkway. Shomrim followed the man as he fled into the building at 964 Eastern Parkway, just moments ahead of the police.

The NYPD as well as State Police arrived at the building, and after a quick walk through of the building, were ready to call off the search. A special operations Lieutenant pushed more, and with the help of NCO officers, gained access to the buildings security footage and they located the apartment the thief had gone into.

Minutes later, both the thief and his girlfriend were in custody.

The thief, whom according to sources had multiple prior arrests, was charged with theft assault and drug paraphernalia. His girlfriend, who was also well known to the police, was charged for drug related charges only.

The two Shomrim volunteers assaulted sustained only minor injuries, and were treated by Hatzalah at the scene.