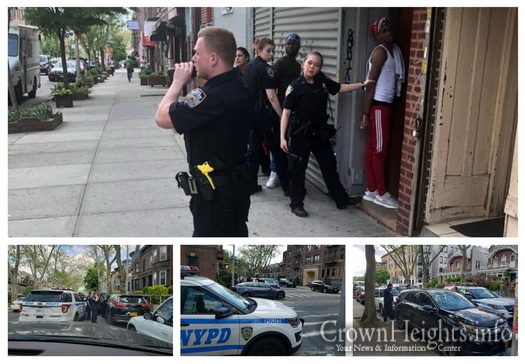 Three people are in custody after they stole a car in Crown Heights Monday afternoon, and led the police on a foot chase. The thieves were busted red handed with the help of Shomrim.

Three people were arrested Monday afternoon after they stole a car in Crown Heights, and led the police on a foot chase.

The car had been accidentally left open, and the four young men, noticing the unsecured vehicle, decided to drive off with it.

The thieves ripped out a front facing drivecam, and thought they had removed any chance of being caught. They were unaware of a GPS tracker on the vehicle that allowed the owner to watch it from afar.

The owner called Shomrim after the car pinged to Crown St between Rogers and Bedford Ave.

A Shomrim Volunteer located the vehicle which was still occupied by the four theives, and called 911.

The police arrived, and the four attempted to flee on foot. A foot chase ensued, with three of the four being caught on Montgomery St and Rogers Ave. One of the group got away.

The three thieves arrested are being charged with Grand Larceny.

Our Vol responded to a tip regarding a stolen vehicle, upon arrival we observed a few males occupying the vehicle and thanks to great #collaboration with @NYPD71Pct three males were placed UNDER arrest #ItsWhatWeDo #EyesAndEars pic.twitter.com/cs3WXcb2sH