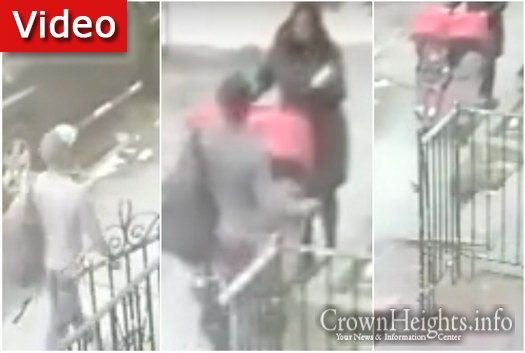 A mother pushing a stroller with two children inside came face to face with an enraged man in Crown Heights Monday. The events were caught on camera as the man kicks aside the stroller, hitting the mother.

A mother found herself in the center of a shocking incident Monday afternoon, when an enraged man kicked aside her stroller with her two children inside.

The incident occurred on Sterling St between New York and Brooklyn Ave just before 2:00pm.

The mother had been returning from picking up one of her children from play group, when a man, described as a black male wearing bright blue pants and a grey shirt, came to the front of her stroller. The man is reported as having told the mother to “get out of my way *expletive,* and babies.” He placed his foot on the front of the stroller, and shoved it into the mothers stomach.

The man then walked off as if nothing was done. The victims husband followed the man to a building on Kingston Ave, where he let himself in.

Crown Heights Shomrim and 911 were called, and a police report was filed, and the incident is being investigated.

Video of the incident was obtained by Crown Heights Shomrim.