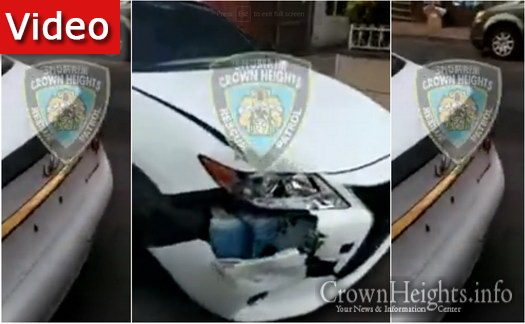 The Vehicle that caused damage to two other cars on New York Ave and President St Wednesday night was found in Crown Heights by Shomrim.

The vehicle that hit and ran from an accident on New York Ave and President St Wednesday night was located in Crown Heights by an alert Shomrim volunteer.

As previously posted on crownheights.info, the accident occurred Wednesday night around 6:00pm, when a white, four door sedan ran a red light crossing President St, and t-boned a black Infiniti Sedan as it pulled out of a parking spot, causing it to hit a third car.

Cell phone video of the incident caught the car speeding away, and enabled the police to track the licence plate to a Chevy Tahoe, registered in North Carolina.

This morning, a Shomrim volunteer discovered a car with the exact description, and no licence plate. He called 911, who positively identified the car as the same from the accident.

Vehicle running from the accident: