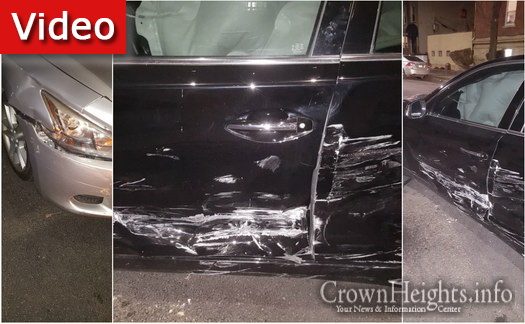 Two cars were damaged and another fled the scene after the three were involved in an accident Wednesday night. No one was injured in the accident.

The accident occurred Wednesday night around 6:00pm at the intersection of New York Ave and President St.

A white four door sedan ran a red light crossing President St, and t-boned a black Infiniti Sedan as it pulled out of a parking spot, causing it to hit a third car.

No injuries were reported in the incident, but thanks to quick thinking, a video of the offending car speeding away was caught on a cell phone.

Crown Heights Shomrim were called, and the volunteers on scene were able to identify the licence plate information, relaying it to the police.

The police were able to track the licence plate on the car to a Chevy Tahoe, registered in North Carolina. The car has also been known to frequent the Crown Heights area.