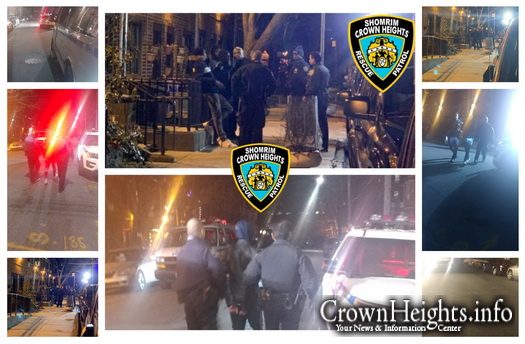 Immediate action by the victim of an assault in Crown Heights, and a quick response by Crown Heights Shomrim, ended with one person in cuffs Wednesday night.

The incident occurred around 8:00pm Wednesday night, as a young couple was at the intersection of Maple St and Kingston Ave.

They were approached by a group of 4 black teenagers, and without saying a word, one of the group punched the husband in the mouth, splitting his lip.

The teenagers continued on Maple St towards Albany Ave, while the couple called Shomrim and 911.

Shomrim volunteers, who were on patrol in the area, immediately responded, and identified the group turning onto Albany Ave from Maple St. They followed the group on Albany Ave until they turned onto Fenimore St.

The police were directed by Shomrim to the group, and after the victim identified his attacker, they placed him under arrest.

When asked for a reason for the assault, the teenager admitted to punching the victim, but claimed he did it because he thought the victim was taking a video of him.

Our hotline received a call for an assault on Maple st. Thanks to a quick response by our Vol #OnPatrol we were able to locate the group and be the #EyesAndEars for @NYPD71Pct who responded quickly resulting in one under arrest #ItsWhatWeDo #Shomrim #Collabration pic.twitter.com/lNo2qmkaF3