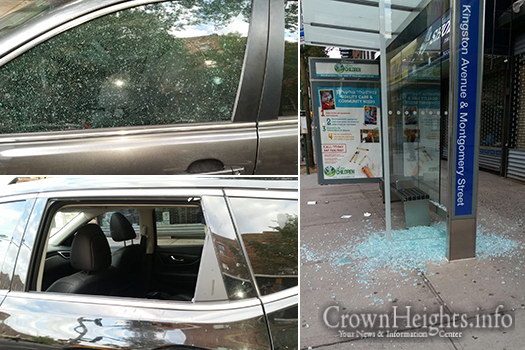 Residents of Crown Heights awoke Tuesday morning to discover that over a dozen vehicles that were parked on Kingston Avenue overnight had their windows blown out, as well as the glass pane of bus stop, in what appears to be a massive case of vandalism.

Cars parked on Kingston Avenue between Empire Boulevard were targeted sometime Monday night and their windows were blown out. The bus stop at Kingston and Montgomery saw one of its glass panals shattered as well.

A resident, who shared photos of the widespread damage, told CrownHeights.info “it looks like 15 cars were vandalized,” adding that it was possibly done with a BB or pellet gun.

It appears that the damage was limited to two blocks of the neighborhoods main shopping corridor, from Empire to Crown.

It is unclear if police reports were filed in connection with these incidents.

Volunteers from Crown Heights Shomrim began searching for surveillance video in hopes of identifying a suspect, “if anyone has access to surveillance video or has any information regarding this incident please contact our hotline at 718-774-3333,” a Shomrim coordinator said.