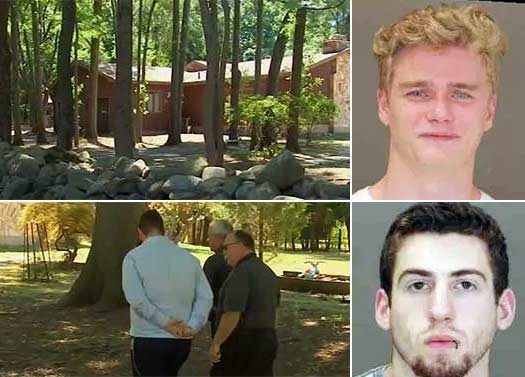 A Monsey area family is heaving a sigh of relief as the two robbers who entered their home last Motzai Shabbos have been taken into custody by the Ramapo Police Department.

Nicholas Kurpick, 20, of Montebello and Lonney Mathes, 19, of Airmont were arrested on Thursday and charged with felony robbery and burglary in the second degree.

Police said that the incident took place on July 7th at 9:44 PM when the two men entered the East Lane home in Wesley Hills.

According to WABC News, the robbers entered the home of Boruch and Chana Weingarden, who were staying with relatives and their children, through an unlocked front door and headed straight for the couple’s master bedroom, taking jewelry, watches and a DSLR camera.

Hearing people moving about in the house and assuming that her husband and brother had just come home from the synagogue,  Weingarden walked into her kitchen where she found the two men who were wearing bandanas to cover their faces.

As one of the intruders fled the home, Weingarden tried to wrest the camera from the other, who pushed her before fleeing on foot.

Boruch Weingarden said that the robbers seemed familiar with the layout of his home, knowing the location of multiple entrances and exits and where the master bedroom was located, giving them ability to get in and out within minutes.

Kurpick and Mathes were both arraigned in the Village of Wesley Hills Justice Court and are being held in the Rockland County jail in lieu of $50,000 bail.

Kurpick was previously arrested last September by the Mahwah Police Department as part of a ring responsible for more than 16 car burglaries, as reported by Mahwah Patch.

Kurpick was also arrested on multiple counts in December 2015, after stealing a safe containing $1,650 from a Suffern home, swimming across the Mahwah River in an attempt to evade police, according to The Journal News.

The Ramapo Police Department was not immediately available to comment on the matter.