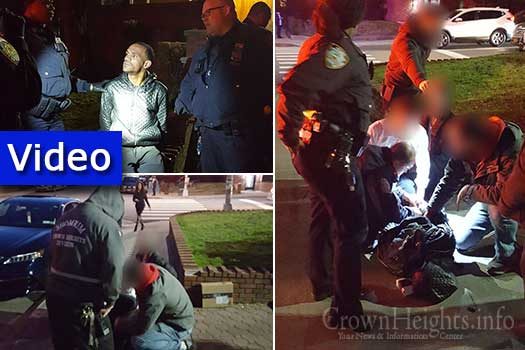 A thief, who was caught on surveillance video stealing packages and blatantly inspecting the goods in plain view, was apprehended by Shomrim after a sharp eyed volunteer spotted again him searching porches for more packages.

An alleged thief, who was captured on surveillance video stealing packages from a porch last week, was at it again Tuesday evening, only this time he was spotted by a sharp eyed Shomrim volunteer, who after alerting other Shomrim volunteers they set out to keep an eye on him while he went from house to house on Montgomery Street in search of packages and waiting for him to strike.

Once again the suspect made his way up and onto the porch of another Montgomery Street house and began opening packages that were delivered a short while earlier and took the items inside.

As he began making his way down the stairs, a group of Shomrim volunteers grabbed him, immediately called 911 and held him until police arrived.

Once police did arrive, he was immediately taken into custody and police recovered an expensive pair of headphones along with some other electronics. He was then placed under arrest.

Police sources told CrownHeights.info that thanks to clear surveillance video from the package theft last week, he will be charged with that theft as well.