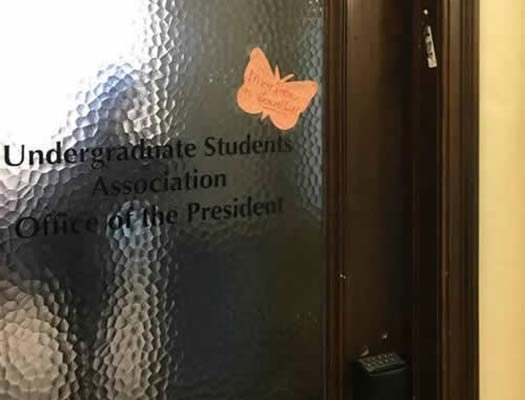 The mezuzah hung on the doorpost of the office of Undergraduate Students Association Council, where Mokhtarzadeh serves as president.

A mezuzah will again go up on the doorpost of the Undergraduate Students Association Council at the University of California-Los Angeles, after having been forcibly ripped off multiple times in the past few years. It will be rededicated next week in the presence of a group of onlookers that the student and a campus rabbi are attracting in response to the act of vandalism.

Arielle Yael Mokhtarzadeh, president of the Undergraduate Students Association, returned after winter break to discover that the mezuzah given to her and affixed last May by Rabbi Dovid Gurevich, co-director of the Chabad House of UCLA in Los Angeles, was gone.

She unleashed a firestorm on Facebook that has gotten national attention and a great many responses, particularly from other Jewish students. As she writes, mezuzahs “have marked the doorposts of Jewish homes for generations; demonstrating dedication to our Jewish traditions, exhibiting pride in our Jewish identities, and expressing defiance against those who pressured Jews to hide or cast away their identities.”

The incident has propelled Mokhtarzadeh, whose Jewish family hails from Iran and knows a thing or two about the persecution of a minority population, to put up another mezuzah as soon as possible.

“I grew up hearing stories about my grandparents’ childhoods in Iran where they were forced to put their Mezuzahs on the inside of their doorposts, rather of than the outside,” she describes. “What better way to honor the sacrifices and experiences of my grandparents and parents than to proudly express my Jewish identity in a way they never could.”

To that end, she and the rabbi are inviting students, faculty and anyone who stands for religious freedom to a ceremony at the student office on Jan. 18, at 1 p.m., to rededicate a new one.

Gurevich says the incident on campus has evoked support overall. But he points to Mokhtarzadeh’s words on social media that have resonated so powerfully and challenged others to take action.

“It’s good to see her respond so positively, to respond to darkness with light,” he tells Chabad.org, noting that Chabad will provide the new mezuzah as well.

‘Display Them on Doorposts’

This isn’t the first time the university has seen such vandalism. Mokhtarzadeh’s predecessor, USAC president Danny Siegel, who graduated in 2017, had his mezuzah torn down as well (so have students at other universities across North America).

As for Mokhtarzadeh, a senior majoring in political science and communications, her message is clear. According to the same Facebook posting, “To those who sought to tell me that my identity was not welcomed: The fact that you felt the need to vandalize my office under the cover of darkness shows that you and your actions do not represent this community, which has no tolerance for your intolerance.

“We know all too well that there are costs associated with championing certain identities in our current political climate. We cannot afford to let that reality become our reality, for the day students at UCLA begin to feel that there are costs associated with being themselves at this University is the day we, as a community, forfeit the right to call ourselves one in the first place.”

Former student Ethan Youseffzadeh posted his reply thanking Mokhtarzadeh for standing up: “The Jewish nation is a strong and fearless one! As a UCLA alumnus, I am not surprised by the action, but very inspired by your response and leadership.”

Gurevich is urging a show of Jewish pride throughout campus. “We’re redoubling our efforts to encourage Jewish students to get their own mezuzahs,” he says, “and proudly display them on the doorposts of their dorm rooms and apartments.”