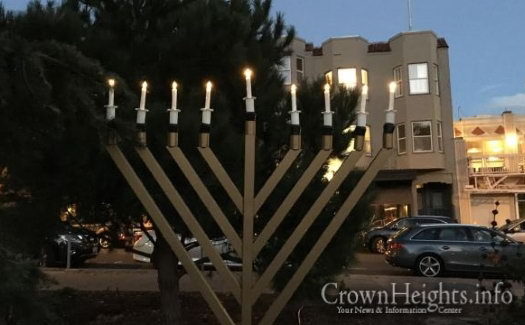 A 6-foot tall menorah was stolen from Washington Square Park in San Francisco over the weekend. It was last seen on Friday, December 23, by Rabbi Peretz Mochkin of the North Beach Chabad.

from The SF News:

According Mochkin, the North Beach Chabad was in the midst of their Festival of Light activities including indoor crafts, treats, and children’s activities being held a block away from Washington Square park at the Naivasha Studio and Gallery located between Union and Grant when members noticed the menorah was missing before its lighting scheduled at 4:00 p.m.

The North Beach Chabad filed a police report on Monday, December 26 and are awaiting any surveillance footage from the neighboring businesses and shops that may have evidence leading to potential suspects involved. At this time no arrests have been made.

Click here to continue reading at The SF News.