« Memorial Marks 25 Since Murder of Yeshiva Student
Shabbos at the Besht: Tu B’Av and Chof Av » 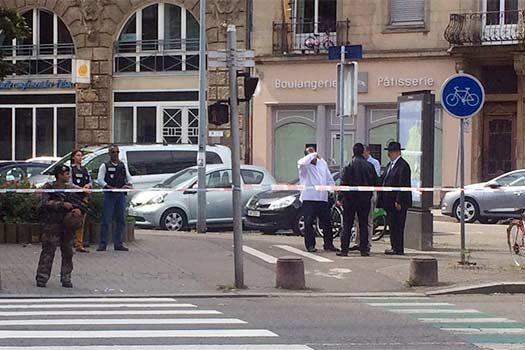 A 62-year-old Lubavitcher man was injured after being stabbed by a man yelling ‘Allahu Akbar’ in Strasbourg, France. The victim was identified as Shalom Ber Levy, who is a longstanding member of the Chabad-Lubavitch community in Strasbourg and father of Chabad Shluchim in France and Israel.

The victim, a 62-year-old Lubavitcher, was stabbed by a man shouting ‘Allah Akbar’, hear his home. He was rushed to an area hospital where he was listed in moderate condition.

The attacker was reportedly arrested by police and a large kitchen knife was recovered.

Mendel Samama, a rabbi also based in Strasbourg, described the victim’s condition as “stable” and said he had spoken to him in hospital.

The incident on Friday morning is the latest in a string of religiously-motivated attacks on French soil.

The attack took place in the north of the city close to Brasserie des Vosges on a major thoroughfare.

Strasbourg, in north-east France close to the German border, is one of the seats of the European Parliament.

It is home to a large community of Jews, with around 15,000 living in or near the city, accounting for around five per cent of the population.

French Jews were targeted in January 2015 during the siege of Hyper Casher, a Kosher supermarket in Paris in which four people were killed.

An elderly man, the son of a distinguished Rabbi, a teacher and a shop worker who was saving up for his marriage were killed in the attack at the Jewish store by a jihadist.

It followed the murder of journalists at the Charlie Hebdo satirical magazine.

« Memorial Marks 25 Since Murder of Yeshiva Student
Shabbos at the Besht: Tu B’Av and Chof Av »