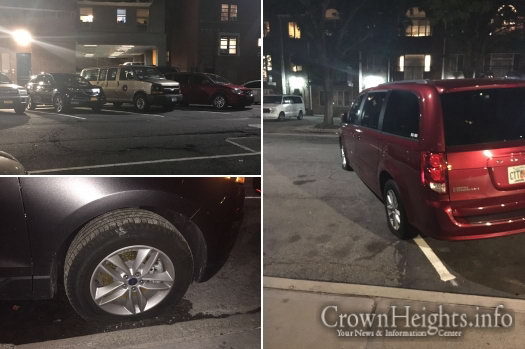 Over two dozen vehicles in Crown Heights – mostly belonging to members of the Jewish community – had their tires slashed late on Friday night. Police are investigating the incident as a possible hate crime.

The incident occurred sometime during the night on Friday night or early Shabbos morning. The targeted vehicles were mostly parked on Lefferts Avenue between Albany and Troy Avenues, although several other vehicles were targeted on nearby streets.

The vehicles’ tires were punctured by a sharp object. Most of the vehicles had only one tire punctured, though some had two, signaling that the vandals were attempting to damage the maximum number of vehicles.

One of the damaged vehicles was a Hatzalah emergency response car, belonging to a volunteer who lives on the block, with special EMS license plates identifying it as such.

The NYPD is investigating the incident, and the Precinct’s Hate Crimes Task Force is following closely to determine if the incident can be classified as a hate crime. A spokesperson for the 71st Precinct said “several vehicles were slashed along Lefferts Avenue. The motive is unknown at this time. Most cars are Jewish-owned.  Hate Crimes [Task Force] will be investigating it to make a determination if it’s a hate crime or not.  No markings of any faith or religion were on most cars.”