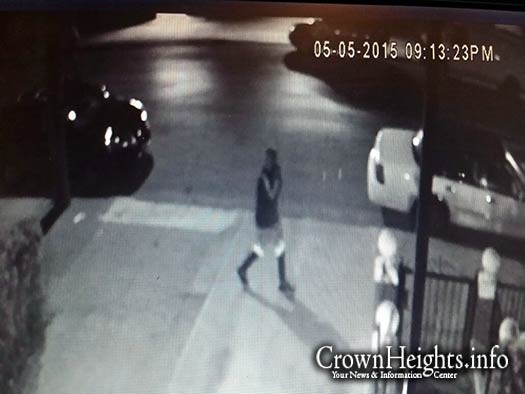 A nearby surveillance camera caught this image of the suspect moments before the crime.

Man Robbed at Gunpoint in Front of His Home

On Tuesday night, a Jewish man was robbed at gunpoint mere steps away from his home in Crown Heights.

The incident occurred at around 9:15pm. The victim was walking toward his home, located on East New York Ave. between Schenectady and Utica Aves., when an African-American man approached him, put a gun to his head and demanded his valuables.

The victim immediately gave over his iPhone, and the perpetrator fled toward Utica Ave.

The man called Shomrim and police, both of which arrived at the scene in under a minute. They searched up and down Utica Ave. for the perpetrator, but unfortunately he was nowhere to be found.

Attempts to locate the phone using the ‘Find My iPhone’ feature were unsuccessful as well, as the criminal had deactivated the device.

In their ensuing investigation, Shomrim volunteers discovered to their delight that a nearby Jewish home had a surveillance camera pointed right at the spot where the crime occurred. Their excitement quickly turned to dismay, however, when the homeowner informed them that the camera had not been activated.