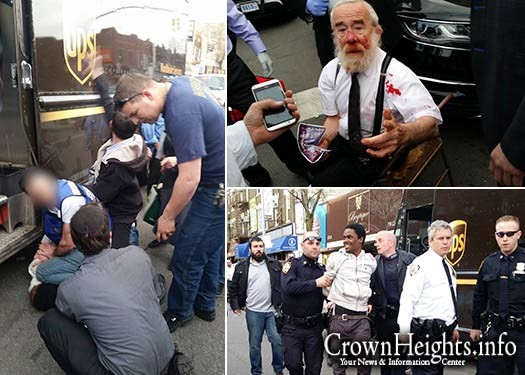 An intoxicated man who was acting rowdy and belligerent on Kingston Avenue assaulted two shop owners when they attempted to calm him down. One man, well known community activist Reb Yisroel Shemtov, was punched in the face and suffered serious injuries.

The incident began at around 5:30pm on Kingston Avenue near Crown Street. The suspect, a black man in his late 20’s or early 30’s, was walking up the block and menacing passersby. Obviously drunk he quickly escalated from words to actions when he kicked over a gumball machine in front First Quality paper goods.

Yisroel Shemtov and Regency Drycleaners owner Dovid Teich approached the man and attempted to reason with him when he suddenly punched Shemtov in the face then turning his rage on Teich and punching him as well and attempted to flee.

After witnessing the commotion shop owners, passersby’s, and a Shomrim volunteer sprang into action, immediately calling for backup and police assistance while grabbing the assailant and attempting to restrain him as he violently resisted.

As more Shomrim volunteers arrived on scene they quickly employed their training, safely and successfully subduing the suspect until police arrived and promptly arrested the man.

In the meantime, Hatzalah volunteers arrived and treated R’ Shemtov for his injuries, then transported him to the hospital for further treatment. The other victim declined medical attention.

Police arrived at the scene and took the suspect into custody. The man was found to be heavily intoxicated, and a bottle of liquor was found in his possession.

As he was being led away by police, the man shouted epithets at the crowd that had gathered: “[expletive] all Jews!” he screamed, adding “I’ll be back and [expletive] you all up!”

The man was charged with felony assault.