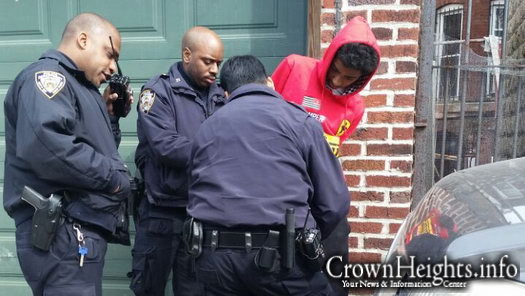 This morning, in the heart of Crown Heights and in broad daylight, a group of teenagers attempted to mug a Jewish man with a firearm. A volunteer for the Crown Heights Shomrim witnessed the mugging, and successfully put a stop to it.

The incident occurred near the corner of Kingston Ave. and Crown Street at around 11:30am. A Jewish man was surrounded by five African-American teenagers, one of whom brandished a firearm and demanded that he hand over all his money.

The man had no cash on him at the time, and attempted to stall them while frantically trying to figure out what to do. Just at that moment, a volunteer for the Crown Heights Shomrim was driving by and noticed that something wasn’t right.

He exited his vehicle and asked loudly “what is going on here?” The five teens immediately fled in all directions.

The victim quickly pointed out the ringleader – the one that had made the threat and brandished the weapon – and the volunteer gave chase to him and called for backup, as well as 911.

The teenager fled through that alleyway between ‘Everything but the Baby’ and Sterling Electronics, and emerged on the other side on Albany Ave. He then fled up Albany, and entered the alleyway that is between Carroll and President Streets and Albany and Troy Aves.

While he was fleeing, the perpetrator dropped his weapon, and removed his bright red sweatshirt in an effort to throw his pursuers off his trail. Thankfully, he was unsuccessful, and he was cornered in the alleyway by Shomrim volunteers, who held him until police arrived.

Other volunteers canvassed the area and found his red sweatshirt, but were unable to recover the weapon.

Police arrived shortly thereafter, and the victim was brought to the scene, where he identified the suspect as the one who demanded his money.

The suspect admitted that he had approached the man, but claimed that he had only “asked him if he could spare a dollar.” The victim told the officers that he had actually said “Give me all your money.”

After hearing both accounts and conducting a brief investigation, police took the suspect into custody, where it was discovered that he is only 15 years old. He was charged with various crimes relating to the incident, including attempted robbery, and taken to the 71st Precinct for booking.

The Shomrim volunteers expressed thanks to the NYPD for their quick and professional response to the emergency.