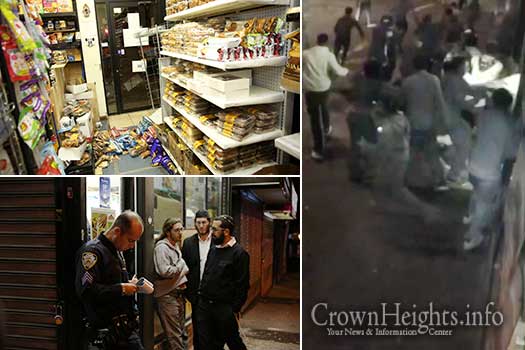 A large group of teenagers went on a vandalism spree in Crown Heights, trespassing into parked school buses and vandalizing parked cars, as well as trashing a grocery store and assaulting one of the store employees.

The incident occurred on Saturday night, beginning at around 9:00pm. A Shomrim volunteer living near Troy and Lefferts Avenues heard a large commotion near his home. After stepping outside, he saw a very large group of approximately 75 teenagers heading up Troy Ave., acting rowdy and belligerent.

Sensing that trouble was ahead, the volunteer decided to keep an eye on the group while calling for additional backup. Being that the group was so large, they did not notice that a block ahead members of the group had already committed mischief, opening up two school buses and attempting to release their brakes.

Once the vandalized buses were discovered, police were immediately called, but by then the group had already entered Gourmet Butcher, a grocery store located on the corner of Carroll and Troy Aves., where they toppled some shelves and damaged several products.

Surveillance video later revealed the shocking audacity of the group, and how shocked the store workers and patrons were by the sudden and violent outburst. “I was in total shock, I did not even know how to react,”Yanki Klein, the owner of gourmet butcher told CrownHeights.info, “when I realized what happened, I right away called 911.”

Klein lamented that this is an ongoing issue and that he raised the matter a number of times with the local precinct, but he feels those complains have fallen on deaf ears. “[Very often] these kinds of kids come by my store and yell ‘heil hitler,’ or steal things that are on shelves near the door,” he said.

“I’ve asked the police to put an officer on my corner many times, but I feel like I am being ignored and these ‘minor’ problems keep happening. And now this, it is a miracle that they did not manage to get all the way into the store, otherwise I would have been dealing with much more damage or worse, heaven forbid,” Klein concluded as he began cleaning up the mess the hooligans left behind.

Police officers filed a criminal report on for the damage.