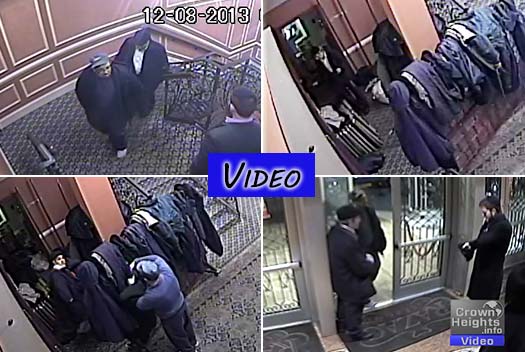 A pair of panhandlers, who are known to frequent Shuls and events around Crown Heights, were captured on surveillance video rummaging through the pockets of dozens of coats during a wedding at the Razag ballroom, making off with a wallet, a scarf and a coat.

The incident was discovered when a wedding guest from out of town went to retrieve his coat and discovered that his walled, which he had left in his coat pocket, was missing. Understanding that he was the victim of a robbery, he approached the manger of the hall and asked if they could review surveillance footage.

That same evening the man noticed a charge on his credit card from a non-kosher food establishment, located just around the corner from the Razag wedding hall. The victim called and cancelled his credit cards, then called 911 and filed a police report.

Later on, when reviewing the surveillance camera footage, the perpetrators were quickly discovered.

Two White males are seen coming out of the hall and approaching the dozens of coats that were left out in the hallway. Together, they go through each and every coat’s pockets. Of the two, one is a familiar face in Crown Heights, while the other seems to be new to the neighborhood.

The duo spent over two minutes, one going through the coats that were hung on the Mechitza while the other spent time under the stairs – and can be seen pocketing the wallet that was reported stolen. That same one then picks up a coat that does not appear to belong to him and puts in on, while the other takes a scarf.

Infuriatingly, as the pair exits the hall, the one that took the wallet is seen asking a man for ‘tzadakkah.’ The man happily obliges and gives him a dollar.

“People cannot assume that their belongings are safe just because they are in the building,” said a worker at the Razag Hall. “A safer bet would be to leave one’s coat at the coat check. There they are ensured that their coats and belongings will be there when they are ready to leave.”

Earlier this year another panhandler was apprehended after he was captured on surveillance video stealing an iPad at a wedding that was taking place in Oholei Torah.

CrownHeights.info received at the time a barrage of complaints about posting the video and clearly identifying him.

“The kneejerk reaction against reporting a crime perpetrated by a person who appears to be Jewish only serves to allow those thieves to continue their free reign and terrorize our neighborhood,” said a Shomrim spokesperson. “That same person later went on to steal cash and electronics from an apartment on Lincoln Place a few weeks later, and was arrested for that crime as well.”

In the comments section of the article about the iPad theft, a reader shared a link of the same person stealing a cell phone that was left to charge in the hallway of Lubavitcher Yeshiva on Crown Street.

“People need to be continually vigilant regarding these panhandlers, many of whom are only pretending to be religious Jews,” the spokesman said.

If any reader recognizes one of both of these thieves, please notify Shomrim immediately by calling (718) 774-3333. There are open police reports against them and they will be immediately arrested.