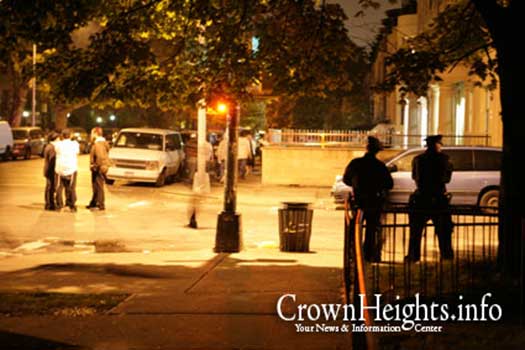 A young Jewish man became the victim of an unprovoked attack and was punched in the mouth while walking on Kingston Avenue Sunday Evening.

The incident occurred on Kingston Avenue near Crown Street at around 9:30pm. The young man crossed paths with a group of about 10 black males, all in their late teens and early 20s, when one of the group suddenly punched him in the face. No words were exchanged between the group and the victim.

Over an hour later the young man told CrownHeights.info that his teeth still hurt, but thankfully he was otherwise unharmed and did not require medical attention.

Shomrim were called to help translate for the victim, who speaks little English, and assisted him with filing a police report for assault.

This incident marks the second random attack against Jews in Crown Heights in less than a week. In the previous incident, a 12-year-old boy was assaulted by two black males, who were part of a larger group of about 15 black males.

Police are treating both incidents as possible hate crimes.

Update: As several commenters pointed out, the young man was not the only victim of this group of hooligans last night. It appears they were playing a sick game called “knockout,” which is gaining popularity among inner-city youth at a startling rate.

The game is exactly what it sounds like, as this CBS report explains.

Warning: The following video contains graphic graphic images and is not intended for children. Please view at your own discretion.