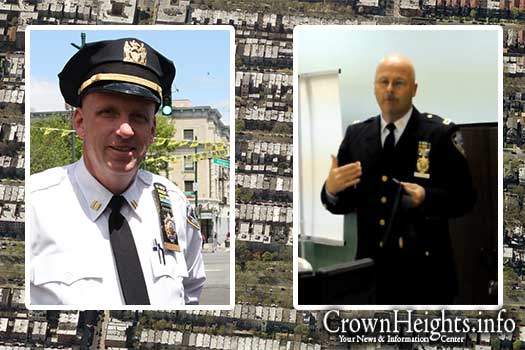 CrownHeights.info has learned that later this week the NYPD will be announcing the appointment of a new Commanding Officer for the 71st Precinct. The current commander, D.I. John Lewis, will be take up a new position of Chief of Brooklyn School Safety.

Replacing Lewis will be Deputy Inspector George Fitzgibbon from the 69th Precinct, which covers the Canarsie section of Brooklyn.

For many this change seems very abrupt and surprising since Inspector Lewis has only been in the 71st for about a year and a half. Inspector Lewis took charge of the command in April of 2012, trail blazing and making great inroads by always being on the street and close to the community.

“if they can’t see you then how can they know you,” Lewis told CrownHeights.info back in August while meeting community leaders. It was this unique policing style and aggressive attitude against crime that made him one of the 71st Precinct’s more beloved commanders.

Video of Inspector Fitzgibbon introducing himself to the residents to the 69th Precinct in 2011: