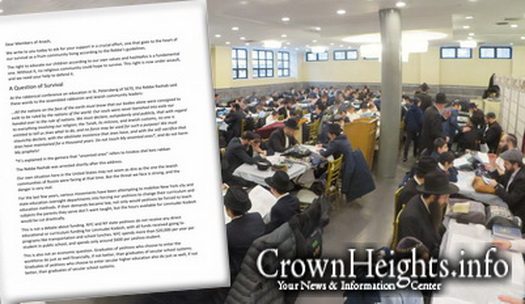 As the assault on Yeshiva Education reaches an important junction, the Menehalim of the Crown Heights Yeshivos came together to ask the community to once again rally together to and protect this important cause:

We write to you today to ask for your support in a crucial effort, one that goes to the heart of our survival as a frum community living according to the Rebbe’s guidelines.

The right to educate our children according to our own values and hashkafos is a fundamental one. Without it, no religious community could hope to survive. This right is now under assault, and we need your help to defend it.

A Question of Survival

At the rabbinical conference on education in St. Petersberg of 5670, the Rebbe Rashab said these words to the assembled rabbonim and Jewish community leaders:
…All the nations on the face of the earth must know that our bodies alone were consigned to exile to be ruled by the nations of the world. Our souls were never banished into exile nor handed over to the rule of nations. We must declare, outspokenly and publicly, that with regard to everything involving our religion; the Torah, its mitzvos, and Jewish customs, no one is entitled to tell us Jews what to do, and no force may be used for such a purpose! We must staunchly declare, with the obstinate insistence that Jews have, and with the self-sacrifice thatJews have maintained for a thousand years: Do not touch My anointed ones*, and do not harm My prophets!

The Rebbe Rashab was arrested shortly after this address.

Our own situation here in the United States may not seem as dire as the one the Jewish communities of Russia were facing at that time. But the threat we face is strong, and the danger is very real.

For the last few years, various movements have been attempting to mobilize New York city and state education oversight departments into forcing our yeshivos to change their curriculum and education methods. If their demands became law, not only would yeshivos be forced to teach subjects the parents they serve don’t want taught, but the hours available for Limmudei Kodesh would be cut drastically.

This is not a debate about funding. NYC and NY state yeshivos do not receive any direct educational or curriculum funding for Limmudei Kodesh, with all funds received going to programs like transportation and school lunches. NYC spends more than $20,000 per year per student in public school, and spends only around $600 per yeshiva student.

No, this is a much more fundamental debate: Do religious parents have a right to determine what kind of education their children will receive? Do we have the right to determine our own standards for what constitutes success in life? Some people unfortunately want the government to answer with a firm no, and to harness the coercive power of the state in the form of fines and criminal prosecution to force our communities to comply with whatever educational standards they dream up.

It would be impossible to overstate the potential devastation caused by such a decision. A similar fight has been taking place in England over the last few years over hours, and unfortunately, multiple yeshivos there have already been forced to close their doors. Yeshivos closing in New York would be an inevitable result here too, and a wave of fine and even criminal prosecutions of parents who refused to comply with the new secular standards would surely follow.

But B’H, we have the ability to fight back. In response to these efforts, an organization called PEARLS (Parents for Educational and Religious Liberty in Schools) has been operating at every level possible to counter them and preserve our fundamental freedom. This is an organization supported by frum communities of every stripe, and endorsed by rabbonim and mechanchim across the spectrum.

Thanks to PEARLS efforts, the NY State Board of Regents has been forced to go back and institute a review period on their original decision to require yeshivos to comply with new secular educational standards. We are currently inside of this review period, and the PR and legal teams of PEARLS are working overtime. With Hashem’s help, the final decision will come down in our favor.

But those PR and legal teams are very expensive. In order to continue these efforts, significant funds must be raised to continue operations. And that’s where we turn to you.

In this battle, no one can stand aside. No one can think that this doesn’t apply to them. If we were to lose this fight rachmana litzlan, it is impossible to predict the extent of the damage that would result; not just from the decision itself, but from the precedent it would set, and from the encouragement it would give to enemies of our communities.

From the fires of concentration camps to the frost of the gulags, our grandparents sacrificed everything so that the flame of torah, mesorah, and chassidus would not fade away. They gave everything they had, and endured great danger, in order to give their children a Chinuch Al Taharas Hakodesh .

Today all we ask is your financial support.

This is a crucial time. We are chassidim, and we have work to do. We cannot allow anything to prevent us from teaching the next generation of the Rebbe’s soldiers about the mission they were entrusted with, and from giving them the tools they need to complete that mission. We cannot abandon the educational vision and framework left to us by our rebbeim.

Please give generously. Future generations will thank you.

The Menehalim of Crown Heights.