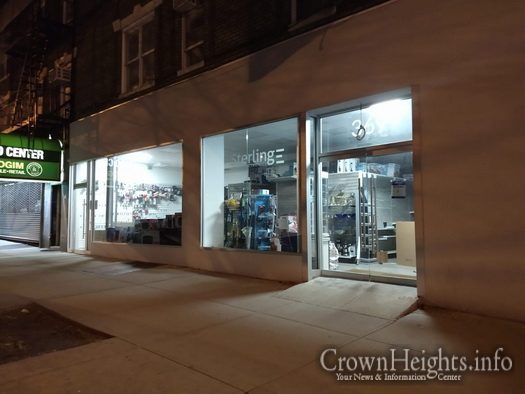 Store in “Swipe for Points” Scheme Quietly Clears Out Merchandise

Sterling Electronics has been partially cleaned out in a quiet move Thursday night. Many Crown Heights residence witnessed as moving trucks pulled up to the store and workers began removing the merchandise from the shelves. This comes following the revelation of the stores involvement in the recent Credit Card “swipe for points” scandal that left many with tens of thousands, and some with hundreds of thousands of dollars in debt.

CrownHeights.info has received multiple alerts from community members as moving trucks and multiple workers were seen emptying shelves and merchandise from the iconic Sterling Electronics store on Kingston Ave. Stories of harassment from the workers have surfaced, as they attempted to prevent people from taking photos during the Thursday night clean out.

The store can be seen in photos with some shelves bare, and the floor littered with boxes to be packed.

This follows the recent revelation of the “Swipe for Points” scandal that was broken here on CrownHeights.info, shining a light on the corruption behind the scandal in hopes of educating the public.

The scandal was based in the Sterling Electronics storefront on Kingston ave, and spilled over to an alleged buyout of the famous electronics store “The Buzz.” The buy turned out to never have been completed, leaving many wondering where the money went.

The premise of the scheme was rooted in the sometimes lucrative market of credit card points and rewards programs. From signup bonuses to spending goals that double rewards, many had allowed themselves to be lured into this risky practice in which they allow individuals and companies to use their lines of credits, with a promise of repayment, so that they can “manufacture spend.”

The “foolproof” scheme fell apart as the store, already in financial trouble following some alleged “bad business decisions,” became unable to pay its bills. In a last ditch effort to stay afloat, an additional charge was made on the credit cards. This time though, the store was unable to return the money from the charges made, leaving all the credit card owners with the debt.

The store has not reopened since the revelation of the nearly 4 Million dollar credit card scheme. Rumors that additional monies taken as personal loans were also involved in the scheme, could not be verified by CrownHeights.info.

The owner of Sterling Electronics, Gershey Nueman, was unable to be contacted, his