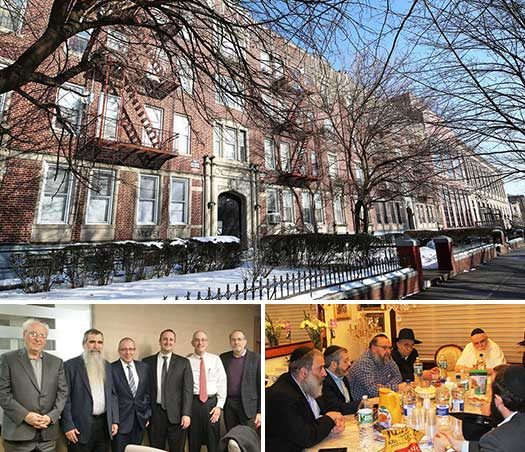 Following a successful fundraising campaign, Oholei Torah – Crown Heightses largest boys school – announced that they have completed the purchase of the building next door to its existing properties.

The Board of Directors of Oholei Torah are pleased to announce the purchase of 639 Eastern Parkway, which now will be part of its Eastern Parkway campus.

A recent campaign secured the funds for the down payment, closing costs and initial renovations. With the purchase of the adjacent 24 unit apartment building, it gives the opportunity for further growth and much needed expansion.

Many friends and supporters of Oholei Torah have followed the purchase with great excitement and have shown much interest in this project.

R’ Avremel Lokshin, a member of the Board, emphasized that this is just the first step in a multi-phase expansion of the Eastern Parkway campus. This expansion will be done in stages, making sure that each step is well thought through and implemented properly. R’ Lokshin said that “the overwhelming support we got from the entire community for this first stage gave us much encouragement to continue working on behalf of the Moisad’s growth. We have confidence that the community will continue to support us throughout this process.

Harav Yitzchok and Rebbetzin Shaindel Raitport took a leading role in securing the funds, together with members the Board of Directors and many from the Chabad community of Crown Heights and around the world.

The Board wishes to thank Oholei Torah’s loyal friends and supporters, R’ Yoseph Yitzchok and Batsheva Popack, for enabling the purchase of the building. Mr. Popack, a real estate developer, has a long standing policy of not selling his properties, but in this particular case, he saw the importance and great need for Oholei Torah’s expansion and readily understood the need and the value the property has to Oholei Torah.

Rabbi Nosson Blumes, Director of Development, together with the members of the Board, will now be planning a long term campaign to raise funds to secure the renovations and future building projects, all with the goal of accommodating the many divisions of the Moisad.

Rabbi Joseph Rosenfeld, Executive Director, often refers to a letter from the Rebbe sent in 1958/5718, upon the purchase of Oholei Torah’s very first building, a brownstone adjacent to the former Brooklyn Jewish Center. In that letter the Rebbe gives a directive that the first purchase should lead to further expansion for the moisad, in an aspect of uforatza, which has been realized over and again.

R’ Shmuel Brook represented Oholei Torah at the actual closing, and the Board together that evening for a chassideshe farbrengen, and to further dedicate themselves for the betterment of Oholei Torah.

Many dedication opportunities are available. To learn more about of the expansion project, please contact the Development Office at 718 483 9000 ext. 2.