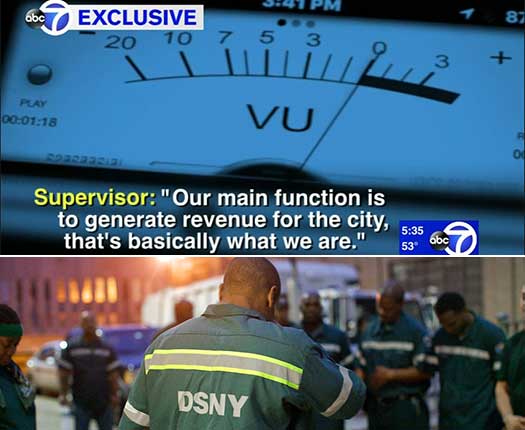 An investigation by ABC7’s Jim Hoffer uncovers what is believed to be ticket quotas being enforced against enforcement officers in New York City’s Department of Sanitation, leading resident and business owners to complain about bogus tickets.

The investigation, conducted through ABC7’s On Your Side program, surrounds former sanitation employee Marc Conte, who joined the sanitation with the intention of being a “green cop”, only to be fired after he refused to write bogus summonses driven by what he called “money.”

“I’ve seen some of the numbers. I’m not happy with. It’s going to fall back on me – they expect double digits,” said the Supervising Lieutenant.

And by double digits, Conte says, his supervisor expected him and the other agents to write at least 10 tickets every shift.

Hoffer spoke with business owners who also complained, Igor Legosdaed, a juice store manager, had to pay a $100 fine for obstructing the sidewalk, even though their sign was up against the store, nowhere near where people walk.

Read the complete story at abc7ny.com

4 comments on “Does the NYC Sanitation have Ticket Quotas?”