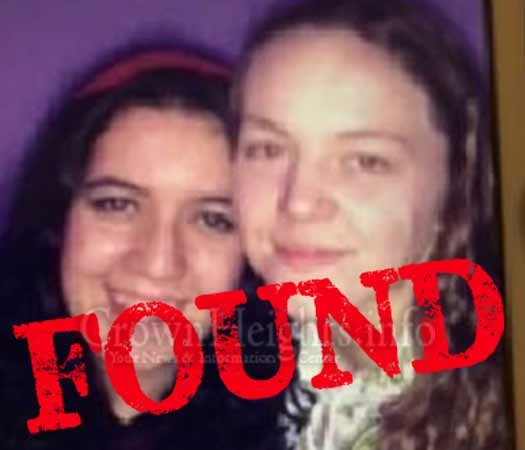 After a grueling night of searches, the two missing Florida high school girls have reportedly been found in a heavily wooded and swampy area near the resort where they were staying.

This report comes after the two girls, Brocha Katz and Rivka Moshe, both 16-years-old and students in Lubavitch Education Center’s Beis Chana High School, have gone missing on Saturday afternoon after going out of a walk.

The girls were in the Caribe Cove Resort by Wyndham in Orlando, Florida, together with their high school for their annual Shabbaton.

According to multiple reports, a helicopter spotted two girls in waist-deep water and in a heavily-wooded and swampy area near the resort where they had gone missing from. The pair were seen waving frantically to the helicopter. Rescue personal could not get close by air, and have sent in rescuers by foot.

After nearly 30 minutes from when they were first spotted by the helicopter, came the good news that they are indeed confirmed to be the missing girls.

“We are currently in communication with them and hope to reach them soon,” said the source.

Finally, at 12:55pm rescue personal exited the forest together with the two missing girls. They were reunited with their waiting families and immediately placed inside waiting ambulances and taken to a nearby hospital for checkups and evaluations. They appear to be in ok health, only suffering from exhaustion and dehydration, despite the adverse conditions they have been in throughout the night.

“This miracle couldn’t have been brought about without your efforts. I’ve seen the amazing things that we can do as a nation, a people and a family. I’ve been a part of it. But to now be on the receiving end I see so much more how amazing klal yisrael is.

“Thank you from the bottom of our hearts and may we all have only good news to share from now on.”