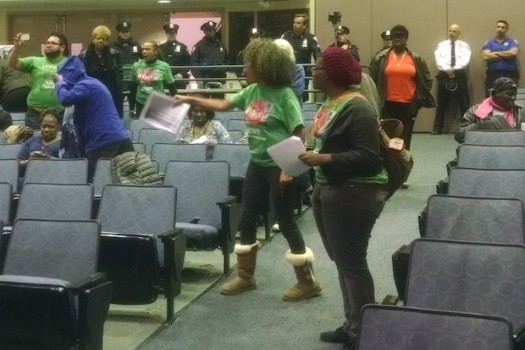 In an open letter to the Crown Heights community, Colonel Jacob Goldstein, who served as chairman of Community Board-9 from 1979 until 2014, is urging community members to attend tonight’s monthly board meeting.

Also attending the meeting will be Alicia Boyd, founder of MTOPP (The Movement to Protect the People), which has a history of distributing blatantly anti-Semitic flyers and e-mails.

As she does at every meeting, Boyd will inevitably cause a disturbance with her hateful rhetoric against Jews and white people. Col. Goldstein urges members of the community to attend the meeting, and drown out her vile diatribe with something we all have lying around the house for Purim – Gragers.

To the residents of our Shchunah,

Until June 2014, I was the elected Chairman of Community Board-9, a position I held since 1979. As the Chairman for those many years, my goal was always to deliver the best of city services through the offices of the Community Board run by our district manager Pearl Miles, who was there for over 30 years. We rebuilt the entire Eastern Parkway from curb to curb, rehabbed all of the parks in our CB area, and planted hundreds of new trees, along with many other projects. With the election of our new Borough President, there came about change. 19 new board members were placed on the Board, and I opted not to run as I could read the tea leaves on the future of the board. What I did not see was the open Anti-Semitism that was to break out with no push back, revulsion or comment from the new board leadership or elected officials.

Three weeks ago, an anti-Jewish e-mail and earlier flier were sent out to the entire Community Board mailing list, plus to many community members. No one from CB-9 Executive responded to this piece of garbage, nor did any elected official, though they all were aware of it. Yaacov Behrman, a member of CB-9, wrote a response and that was it. I did not for various reasons, as I had hope others would, which did not happen.

Tonight at 7PM is the monthly meeting of Community Board 9 at Lefferts Junior High School, located at New York Ave. and Empire Blvd. The anti-Semite and her group will be in attendance, as she shows up every month to hurl her words of hate. This time WE should be there to Confront her and group if they hurl their hate . Let’s act respectful and listen to the Board’s business, but not allow her to spew her hate. It is before Purim and each of us have Gragers in our homes. When she spews her hate, let’s drown her out with our Gragers.