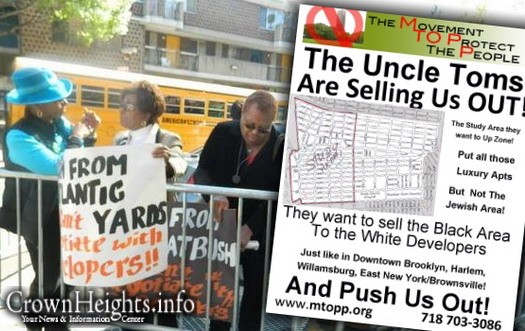 Alicia Boyd, founder of the Movement to Protect the People (MTOPP), an organization dedicated to fighting rezoning and development in Crown Heights, sent an e-mail to all members of Community Board-9 that contained some inflammatory language against Jews and white people, and which seemed to justify the Crown Heights riots of 1991. One recipient of the e-mail, board-member Yaacov Behrman, took it upon himself to respond.

When I was a little girl growing up in Brooklyn The greatest hero to come out of Brooklyn was Shirley Chisholm The first Black Female Congresswoman! I remember being disappointed that she wasn’t a raving beauty But I could remember the pride that I felt that she was from Brooklyn My hometown, my borough, the biggest concentration of Black People In the United States, what a hero!

When I grew up I realized that she also possessed something Better than beauty, she processed integrity, commitment And a desire to truly represent her community. Her famous motto was “UnBrought and UnBossed!”

As it is always known, The dark comes after the light – The reign of Former Assemblyman Clarence Norman came into being.

For two decades he destroyed Shirley Chisholm legacy With his own, of corruption and thievery. He was known for his extreme loyalty to his people closed to him And absolute in difference to his own people’s struggles.

He watched as the Community Board 9 was completely controlled By a hand full of Jewish and White males from Prospect Lefferts Garden While the Black community was completely ignored and disempowered. The Crown Heights Riots depicted these serious inequalities  but very little was done, beside a few token jobs and money Given to youth programs etc…

During Clarence Legacy Brooklyn because known as the most corrupt borough in NYC, With his faithful allies standing beside him.  One being Carman Martinez who was also caught doing illegal stuff But was given a pardon for her testimony against him, which placed him in handcuffs, his lawyer’s license revoked,  and   9 counts of corruption convictions, mostly for selling out the Judicial system, where anyone wanting to become a Supreme Court Justice, or Civil Court Judge In Brooklyn, could just buy it from Clarence.

Then on September 23, 2014, all of the corruption at the community level was about to be exposed. That was the day in which the community residents came out in full force To the Community Board 9 to stop a rezoning, which would cause the Black community to be seriously displaced and the neighborhood gentrified as it has been happening in all communities of color in NYC.

This request actually targeted only the Black Community and again left the Jewish Community safe, outside its borders!

Again the community residents could see the inequalities, the racial profiling, the disempowerment of the people contained right within the borders of the rezoning request.

The newly appointed members of the board were a part of that new movement, For they had been told they were being placed on the board to stop this Old regime from continuing to dis-empower the people. The aim was to remove Pearl Miles from her position, To change the way in which CB9 operated and to get a Black Executive Board in, who would empower the people.

So this new group of CB9 members all voted to listen to the people And rescind the letter, all except one person, Michael Liburd The question one asked was what did Michael Liburd know that the rest of the members Didn’t, but I will get back to that one.

Then a year of hell began as each member of the board was approached And was convinced that… Only the Black side of the park, needed rezoning, not the Jewish. They were convinced that this was a protective move. That City Planning was actually coming to protect our homes From all of the development happening in our community.

And yet nothing they had seen so far in the history of City Planning Every showed that a Black Community came out ahead when a rezoning happened.

In Fact everything was showing the opposite. Williamsburg, Harlem, Downtown Brooklyn. These were all examples of communities’ once affordable, livable communities Now completely out of reach for people of color, and where the original people Were violently removed from their homes and businesses.

They were however told that City Planning only wanted Empire Blvd And just by giving up those three blocks, countless of other blocks Would be protected.

Of course none of this was put in writing. These were just whispered statements, with no guarantees Just going on blind faith and honesty which hadn’t been displayed as even existing.

In a move to stop any type of education or the voices of the people Community residents were time and time again prevented from speaking From joining committees.

Community board members were told lies about what they could and couldn’t do And kept completely in the dark. Some were brought with favors or promises, others threaten and some just removed At the end of the term, whereas others were promoted depending upon Their commitment to a rezoning.

In the mist of all this, there was Carmen Martinez known loyalist and apart of Clarence Norman Regime, having just lost her $140,000 year old job in June 2014, Due to the Conflict of Interest Board filing charges against her For stealing 14 years of Time from the Comptroller’s Office from 2000-2014.

This is also the same time that she was working directly for Clarence Norman, So we can see how she might have been using that stolen time, Despite the records making the claim she did it in support of non-profits, namely my Block association, which she didn’t officially join as an officer until 2011-2012.

She was illegally placed on the Board in June 2014 along with Michael Liburd But she dared not vote against the people on September 23, 2014,  because at that point, she knew she couldn’t go directly against her block, who were the ones pushing for this rescinding of the resolution the hardest.

But from that day forward her side did a serious campaign  of discrediting the opposition, telling the board members that City Planning actually Was trying to help and not harm this community. and laying the ground work to eventually Remove Pearl Miles and place Carmen Martinez in her position,

Because Carmen now found herself completely unemployable by any other governmental agencies Because of the all of the baggage that she was carrying; her affiliation with Clarence Norman, and her known tarnish record of theft of 14 years!

But first they needed Pearl Miles to do their dirty work. To continue her reign of disempowerment, so that a letter would be passed to give to the department of City Planning requesting to rezone the Black side of the Park and the Black side of CB9.

However, once that had been accomplish (but not very good) they threw Pearl Miles under the bus,  blamed the entire year on her and then proceeded to move forward.

New members were appointed onto the board and given specific instructions as to their reason why they were placed on the board and the “hunt” for a new District Manager began.

A Search committee was formed, without community residents being allowed to join, conditions of employment was all  decided behind closed doors, including that huge spread of money from  $59,000-$145,000 for the salary of the District Manager.

As Demetrius Lawrence did his famous “I’m Sorry” routine, every time he violated the law, and of course true to form, Carman Martinez submitted her application And is now conducting herself as if she is running CB9 already.

Despite having less than two years of experience on the board, she is now handling housing issues, landuse issues, landmarking issues and is now a voting member of the Executive board,

She was the main person, who has initiated, based upon her word, The overthrow of the Executive Board with voting Chair members, because she read in the Mayor’s Pamphlet and in the City Charter That Chairs are a part of the executive Board!

Of course the community residents will not be surprised That Carmen Martinez winds up a part of the final three applicants To be considered by Community Board 9, nor will we blink an eye when she is voted in as our District Manager

We are aware that a reign of corruption just doesn’t stop, Because the people demand for it to stop, Just as it just didn’t begin.

We understand that Shirley Chisholm left a powerful legacy And maybe at one point Clarence Norman had tried to follow in her footsteps but found them too big and powerful.

That corruption is a disease that eats at the soul and slowly like an addiction It happens so quietly that one doesn’t even know it until it is too late.

But all things change and change is on the horizon As Karen Fleming stated at the last Community Board meeting This community is now fully awake and we are not going back to sleep! Our Eyes are Wide Open!

We will not sit and watch another legacy of corruption take hold Of Community Board 9, we will not watch our family and friends and homes be destroyed because a few want to make millions off of the suffering of the many.

One thing history has taught us is that all corrupt regimes falter and die and Community Board 9 is no different.

Your email is deeply offensive, inflammatory and borderline anti-Semitic.

Yankel Rosenbaum was stabbed as a crowd shouted “Kill the Jew.”

He was the victim of a modern day progrom.

The Crown Heights riots have no place in a discussion regarding the housing crisis or the complexities surrounding CB9. To link the two is completely inappropriate, and you seem to be suggesting that murder and violence was justified.

My family has lived in Crown Heights since the 70s. My synagogue has been here since 1940. I grew up on Carroll Street.

We had, and we continue to have, good relationships with all our neighbors on the block.

I have great memories of our African-American neighbors coming to over to the house for gardening advice from my mom, and to discuss jazz with my father.

I learned that both our communities have gone through persecution and suffering over the years. We have that in common.

The housing crisis is an issue facing both our communities. Members of the Jewish community that have lived in Crown Heights for generations are moving away because they can’t afford to purchase a house or pay rent. The cost of apartment rentals has gone up 65%.

This is about economics not race. Your rhetoric is hateful, dangerous and divisive.