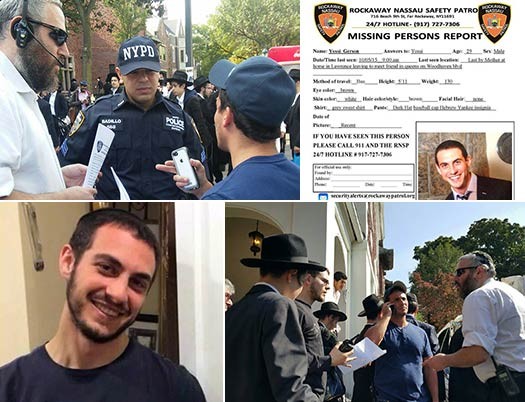 The search for a missing Lawrence man, 29-year-old Yossi Gerson, came briefly to Crown Heights today when volunteers received a tip that he may be in the neighborhood. The search is ongoing, and a $20,000 reward is being offered by the family.

Parents of the missing man called authorities to report their son missing after he did not return home when Yom Tov ended. He was supposed to be at a Queens friend’s house for Shmini Atzeres, but never made it there.

A coordinated search effort between the Nassau County Police and the Rockaway Nassau Safety Patrol has been going on for over four days.

On Friday morning, a tip was received that Yossi may be in Crown Heights. A group of volunteers, aided by members of the Crown Heights division of Shomrim, conducted a search of the neighborhood.

After two hours of searches, Yossi has still not been found, and the search is continuing.

A group of family friends has stepped forward and are now offering a $20,000 reward to anybody who has information that can lead the police to the location and/or exact current whereabouts of Yossi.

Yossi is in desperate need of medical attention, and his family needs any and every possible lead as soon as possible. Volunteers from Shomrim and Hatzolah, along with police detectives, are searching for him.

There isn’t much to say other than we are heartbroken. Our dear Yossi has vanished without a trace and we are asking and begging everyone everywhere to be our eyes and ears in the hopes that somebody has seen something. Whether you are in the Five Towns, Queens, Brooklyn or beyond, we ask you to share this information with anyone that you can.

Yossi needs to be found quickly so he can get the proper medical care from his doctors and resume what had been a wonderful and successful medical school path.

We ask you to respect the privacy of our family during this difficult time and we continue to have endless thanks to the hundreds of incredible heroes who continue to do everything they can to bring our Yossi home safely.