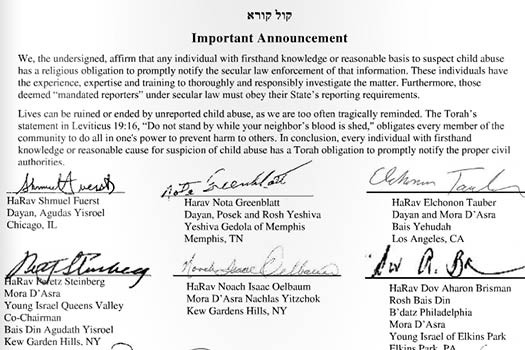 107 Rabbonim and Dayanim have signed a Kol Koreh [public proclamation] affirming the Halachic obligation of all Jews to immediately report and notify secular law enforcement when they know of an instance of child abuse.

The Kol Koreh is a historic watershed, due to its unprecedented, broad-based support from a large number of Rabbonim.

“We, the undersigned, affirm that any individual with firsthand knowledge or reasonable basis to suspect child abuse has a religious obligation to promptly notify the secular law enforcement of that information. These individuals have the experience, expertise and training to thoroughly and responsibly investigate the matter. Furthermore, those deemed “mandated reporters” under secular law must obey their State’s reporting requirements.

Lives can be ruined or ended by unreported child abuse, as we are too often tragically reminded. The Torah’s statement in Leviticus 19:16, “Do not stand by while your neighbor’s blood is shed,” obligates every member of the community to do all in one’s power to prevent harm to others. In conclusion, every individual with firsthand knowledge or reasonable cause for suspicion of child abuse has a Torah obligation to promptly notify the proper civil authorities.”