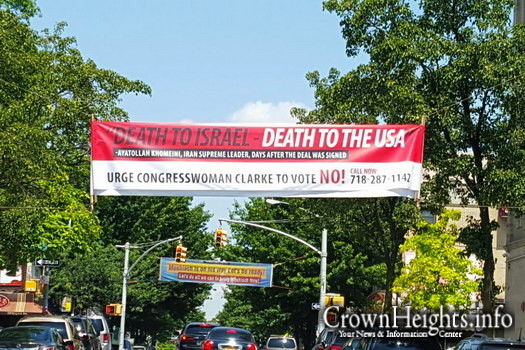 A grassroots campaign is underway in Crown Heights to urge Congresswoman Yvette Clarke to vote against the proposed nuclear deal with Iran.

One of the anti-Iran-deal banners read “Death to Israel. Death to the USA.” Which is a quote from Iran’s Supreme Leader Ayatollah Ali Khamenei, which he made in the days following the agreement at a national gathering. Other banners read “Deal gives billions to terrorists.”

All the banners have Clarke’s phone number and ask community members to call her office and urge her to vote against the deal.

Clarke represents the 3rd largest Jewish district in the country, with approximately 25 percent of her district being Jewish. It includes the heavily Orthodox Jewish neighborhoods of Crown Heights, East Flatbush, Flatbush and Kensington.

CrownHeights.info spoke to a spokesperson in Rep. Clarke’s office who said “the congresswoman is always glad to hear from her district and a statement will be released in the near future,” adding that as of now she has not indicated where she stands on the deal.

The spokesperson also said that they have been receiving “many” phone calls from district residents who were concerned with deal.

NuclearFreeIran.org, a website with information about the Iran Deal, has been set up and has information for those who wish to reach out to their Congress representatives in order to urge them to vote against the deal.