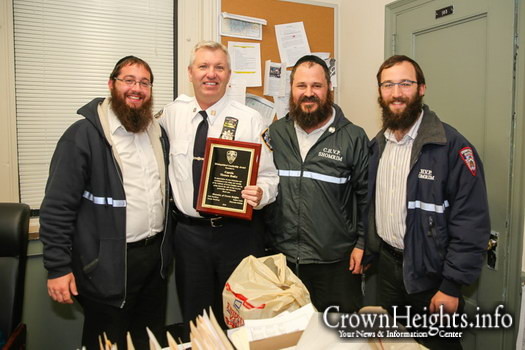 Coordinators of the Crown Heights Shomrim met this morning with NYPD Captain Thomas Burke to thank him for going beyond the call of duty in his work together with Shomrim while he was serving as a Captain and Executive Officer in Crown Heights’ 71st Precinct.

During the time Captain Burke served in the 71st Precinct under Deputy Inspector George Fitzgibbon, Shomrim had dozens of interactions with him, including searches for missing children, arrests, and attending community functions and activities.

Through this close relationship, Shomrim was able to better fulfill its mission of protecting and serving the community.

Recently Captain Burke was transferred to the 63rd Precinct, where he now serves as the Commanding Officer.

Shomrim, a rescue and safety patrol comprised entirely of volunteers, relies on the police department to protect and watch over the neighborhood. Through their partnership with the NYPD, Shomrim is able to lend a hand in assisting and protecting the residents of the community.

At this morning’s meeting, Shomrim presented Captain Burke with a “distinguished leadership award.” It bore an inscription which read “in appreciation of your dedication and commitment to the safety and security of the residents of Crown Heights, and for going beyond the call of duty in your partnership with Shomrim. Thank you.”

Captain Burke began his career with the NYPD as an officer serving in the 9th Precinct in Midtown Manhattan. During his time in the 71st he served as the Executive Officer, and was later given his own command in his transfer to the 63rd Precinct.