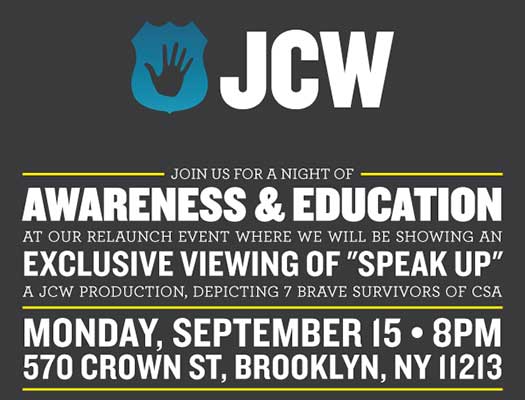 An event Monday evening will mark the official relaunch of Jewish Community Watch, an organization whose mission is to combat child abuse.

Hundreds of Orthodox Jews are expected Monday, September 15 at an event in Crown Heights, Brooklyn to relaunch Jewish Community Watch (JCW) and to raise awareness for child sexual abuse (CSA) in the Orthodox Jewish community.

After mounting a successful crowd-funding campaign in July the organization succeeded in raising $150,000 in under 24 hours, the proceeds of which will go to cover a major portion of JCW’s annual budget enabling it to recommence its services.

Survivors, rabbis, therapists, educators and JCW directors are scheduled to address the crowd on the issue of CSA while covering details of JCW’s relaunch including policy discussion and project introduction. A short film, entitled Speak Up which explores the stories of seven Jewish abuse survivors from the orthodox community, will also be screened.

Jewish Community Watch was founded in 2011 by Meyer Seewald, himself a victim of sexual abuse, with the stated goal of breaking the silence and shame that surrounded CSA in the Orthodox Jewish community. Meyer worked with rabbis in the Crown Heights community to release the first rabbinic mandate calling for abuse to be reported directly to the police.

JCW’s first website was launched featuring the Wall of Shame where, after taking testimony from victims followed by extensive investigation, alleged molesters had their pictures posted to warn communities of their actions. JCW collected testimony from victims and worked with many of them to file reports with the police and to pursue justice through the legal system.

In addition, the services offered by JCW began to increase to include education on CSA, awareness events and other activities. Despite its success, JCW was forced to close down in February 2014 due to an enormous caseload which led to a lack of funding.

After receiving hundreds of calls and messages protesting its closure and commitments to donate towards the reopening of JCW, a relaunch plan was formulated. The plan significantly expanded its activities to incorporate a number of services including: therapy for survivors, education, private investigations headed by licensed PIs to investigate allegations of abuse, and an improved Wall of Shame. At the Monday event, JCW will detail those expanded activities as well as bring more transparency to the organization by introducing their board and defining their policies and procedures.

“As a community, we are coming together and by doing so are making a tremendous Kiddush Hashem (bringing honor to God and the Jewish people). Finally, we are admitting we have a problem and facing it head on and declaring that we will no longer ignore or cover it up. Survivors are coming forward with a reinforced dedication, with their heads held high – no longer ashamed. Our communities must follow their lead and even though it may be an uncomfortable topic we must ‘blush for a few moments so others don’t have to bleed.’” wrote Seewald in an email about the relaunch event. Adding that “This event being endorsed by organizations and community leaders demonstrates just how far we’ve come, but there is still so much work to be done and that’s what this event is all about.”