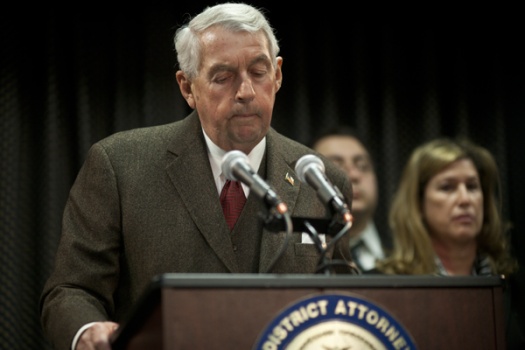 Despite much criticism from victims and activists, Brooklyn District Attorney Charles Hynes has for years steadfastly refused to publish a list he keeps of hundreds of accused pedophiles in the Brooklyn Jewish community. Now facing viable opponents in his re-election bid for the first time in years, Hynes relented – somewhat – and released the names of a few dozen convicted abusers.

Sunday morning the New York Post published a list, released by the DA’s Office, of 46 convicted child abusers who ‘terrorized the orthodox Jewish community from within’. The Post wrote that the publication was “a major shift from his prior stance” of shielding the names of abusers. The list contains only the names of those who have been convicted or have pled guilty.

But some of the names on the list raised eyebrows, leaving the gnawing question: ‘is this an election ploy?’

Most of the criticism toward Hynes focused on the identities of accused pedophiles that were kept secret as part of the controversial Kol Tzedek program, which is geared toward prosecuting child molesters in the orthodox Jewish community. Hynes maintained that outing the accused and convicted perverts could expose the victims to vicious intimidation or deter others from coming forward.

Victims and their advocates have been vehemently condemning this practice, accusing the DA of pandering to powerful ‘lobbies’ within the Jewish community who sought to protect the accused predators by shielding their names from the public.

Mr. Hynes has made claims that Kol Tzedek is responsible for prosecuting ‘hundreds’ of accused predators, leading to ‘many convictions’. However, with the list containing only 46 names, many are left wondering ‘what is really going on with this unit?’

Furthermore, two of the names on Hynes’ list, both non-Jewish African-Americans, raised eyebrows in the CrownHeights.info newsroom, as well as with the coordinators of the Crown Heights Shomrim.

Frankie Hatton, then 21, terrorized Crown Heights women back in July 2009 by roaming around the neighborhood and groping them. He was apprehended thanks to the work of CrownHeights.info – who had obtained surveillance video – which then led to his identification and subsequent arrest.

Bjorn Daley, then 31, assaulted and groped two young girls in June 2010. Thanks to quick work by 71st Precinct detectives, he was identified, charged and convicted of the assaults. Once again surveillance video obtained by CrownHeights.info (which depicted the actual attack, and was therefore not published) played a role in his identification.

Both of these convicted perverts, who preyed on women and young girls, should not have had any connection with Hynes’ Kol Tzedek unit. Hatton and Daley would not have needed – even according to the mission statement of Kol Tzedek – to have their identities shielded for the ‘protection’ of their victims.

The office of the District Attorney declined to comment “about any specific name on the list,” when contacted by CrownHeights.info.

“It is a shameful pre-primary publicity stunt,” said Abe George, a former Manhattan prosecutor who is one of two contenders for the office of the Brooklyn district attorney. “This shows that [Hynes] is over-blowing the strength of the Kol Tzekek unit, which is ineffective at handling the problem in the orthodox Jewish community.”

Mr. George reiterated that he believes this is a cheap political stunt. “For years [Hynes] has not released these names, and now, right before the primaries, he goes ahead and releases them. I think it is obvious that Hynes will do whatever is politically expedient for him.”

The 78-year-old Hynes has been occupying the office of the district attorney for six terms, and is now seeking a seventh. Hynes has responded ruthlessly to potential opponents in the past. John O’Hara and Sandra Roper both challenged Hynes in previous elections, and he later had them prosecuted: O’Hara for voting in the wrong district – a rarely enforced felony, and Roper for stealing from a client – which she was not convicted of. In other elections Mr. Hynes ran unopposed.

Another viable contender in the democratic primary this September is Kenneth P. Thompson, himself also a former prosecutor

This year’s Democratic primary will take place on September 5th. Registered Democrats will choose which candidate will run for election in November on the Democratic ticket.

Joel Pinter, Endangering the Welfare of a Child

Solomon Marmorstein, Attempted Endangering the Welfare of a Child

Arthur Samet, Endangering the Welfare of a Child

Moshe Keller, Endangering the Welfare of a Child

Jedrych Macie, Endangering the Welfare of a Child

Moshe Vaisfiche, Endangering the Welfare of a Child

John Pilieci, Endangering the Welfare of a Child

Eli Belili, Endangering the Welfare of a Child

Nuchum Hammerman, Attempted Endangering the Welfare of a Child

Robert Mannis, Endangering the Welfare of a Child