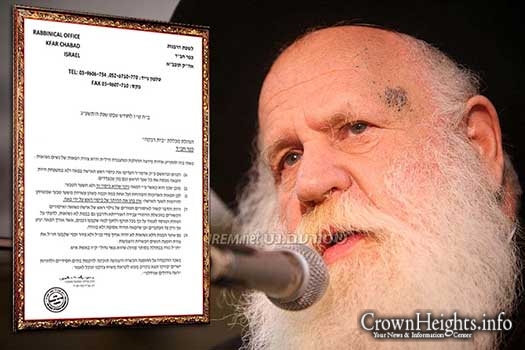 The Rabbi of Kfar Chabad, Rabbi Mordechai Shmuel Ashkenazi, released a letter in which he warns of the ‘long wig’ phenomenon. In the letter, which was addressed to hanhalah of Beis Rivkah in Kfar, he warns that long wigs are not proper hair coverings.

Opening his letter Rabbi Ashkenazi says that he is coming to warn against a ‘growing breach’ in the fashion with which woman have been covering their hair.

Rabbis Ashkenazi writes that “Rabonim, and chiefly the Rebbe, preferred that women cover their hair with a wig and not with a tichel since the wig will cover the entire head along with the hair on the sides.” Adding that its obvious that this should be noticed as a ‘foreign’ covering and not like natural hair.

In his letter he says that “long and wild wigs, even more so when they are made of real hair whose propose is to look like real and natural hair, cannot be considered as a proper hair coverings by a wig.”

In his letter he asked the hanhalah to only allow wigs that fall till the shoulders and not any longer.