One calamity after another has befallen the Chabad community at large. Young lives have been taken from us, Jews are facing prosecution, and others already sit in prison.

Most Crown Heights residents wave their hands dismissively when the case against six Shomrim members is brought up. “It’s just politics,” they say. Despite the fact that these are fellow Jews, the young men standing trial on Wednesday are also the volunteers who altruistically aid the community daily, in countless ways. It would be commendable of the community to now actively take a stand for fellow Jews and give support to those who have been on-call 24/7 to serve others.

It is no longer merely politics. The case, which until now many have been dismissive of, has reached and crossed the threshold of trial by jury. Six Shomrim volunteers are facing years of real jail time if convicted.

“This is no longer politics,” says Aron Hershkop, a Shomrim coordinator. “This is now a Pidyon Shvuim matter, and we need the community’s help.”

In a prepared statement, Shomrim said that while serving the community for more than a decade, they requested no monetary contributions, yet with the trial just one day away, they are now looking to the community for support.

A statement by Shomrim:

For over 15 years, Shomrim, under its current leadership, has been gladly helping the Crown Heights community – from assisting a crime victim in filing a police report, to helping someone with a flat tire – without ever once asking for anything in return.

Unfortunately, the situation has changed and six of our volunteers are facing serious criminal charges stemming from an incident in which they were called for assistance.

Each of the six volunteers has a lawyer and the costs of going to trial are too great for them to be able to individually bear. Tens of thousands of dollars have already been spent, and with the trial just one day away, we ask for the community we so generously help to return that kindness and help us cover our costs.

Torah rule dictates that Jewish people should bring their disputes, arguments and grievances against a fellow Jew to a Beis Din. Going to the civil court system is a heinous iniquity and a blatant contemptuous behavior against Torah.

Unfortunately, due to the laxity of some in this regard, a group of people are now in court defending themselves against a possible seven year incarceration and a lawsuit of 150 million dollars, G-d forbid.

These men are family heads who have altruistically given much time for the enhancement of the security and wellbeing of the Crown Heights neighborhood.

While there are good chances, IY”H, that they will be vindicated, nevertheless, large sums of money have already been expended for their defense and much more is immediately needed.

This is a bona-fide case of PIDYOM SHEVUYIM which is one of the most prominent forms of tzedoko.

I urge you to extend your benevolent generosity to this most worthy cause and well-deserving members of K’lal Yisroel,

May we speedily witness the elevating of the Torah banner and the ultimate redemption. With profuse advance thanks and blessings to merit Divine rewards, I remain,

Court will be reconvening tomorrow, Wednesday, where jury selection will begin, followed by the trial, in which the District Attorney will be presenting their case to the court in hopes of securing a conviction.

For those who would like to attend the trial proceedings and show support, you are welcome to. The trial is taking place at 320 Jay Street which is the New York State Supreme Court on the second floor in the Ceremonial 1 court room, starting at 10:00am on Wednesday October 28th.

Contributions can be mailed to Shomrim office at: 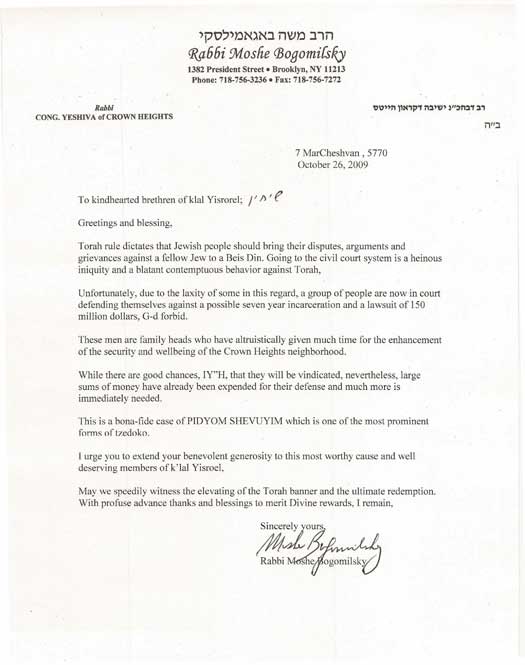