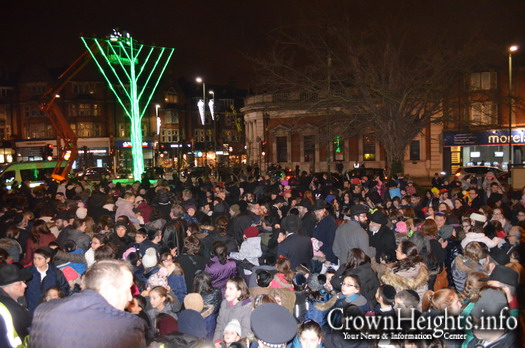 On Sunday night, the 6th night of Chanukah, a big Chanukah festival was held at the Giant Menorah at Golders Green Station in London, UK. This Menorah was the first Public Menorah in London, being lit for the 31st year.

The event attracted nearly 2000 people from all sectors of the community.

12 children from all over London said the Pesukim and sang ‘Sheyiboneh Beis Hamikdosh.’ Rabbi Mendel Gordon from the Yeshiva Emceed the event.

The event featured a fire and unicycle show, balloon making, dreidel man and clowns. There was live music and dancing, which lasted for about 2 hours. Everyone received doughnuts, chanukah gelt and dreidels. The Deputy Mayor of Barnet came along and spoke. Rabbi Moshe Hashel was the Guest Chazzan.

An amazing atmosphere was felt in the air, despite the cold weather.

During the week of Chanukah, each night a guest of honor has lit the Menorah, including personalities from the BBC, Jewish News, Professor Winston and more. The whole week of Chanukah the MC at the Menorah was Reb Hershel Gorman. A video of the Rebbe was shown each evening.

This community event is organized by Tzivos Hashem, under the leadership of Rabbi Yossi and Chanie Simon and Dr. and Mrs. Bunim Weinbaum.

Rabbi Yossi Simon also put up Menorahs in 8 other central locations in London, including a new one for this year – Great Ormond St. Hospital, a specialist hospital for children. As well, every day of Chanukah olive presses were brought to schools and chedorim all over London.