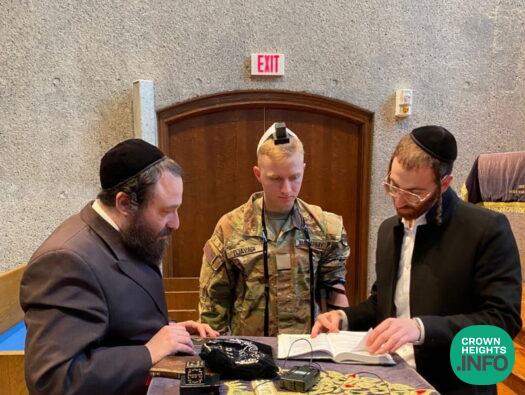 In the blink of an eye, without much thought, you too can become a Shliach. Rockland Legislator Aron Wieder discovered that for himself while at a Congressman’s inauguration at West Point.

Wieder, a noted Satmar Askan and legislator in Rockland County, was with another Rockland businessman at the inauguration of Congressman Pat Ryan at West Point Military Academy when he took up an offer to investigate the grounds. As he traversed the area, he found a Jewish soldier who happily showed him to the West Point Shul.

In a moment he said was without thought, Wieder asked if the soldier would be willing to put on Tefillin. After receiving a yes, he did just that, and extracted a past between them. He would provide the soldier with a pair of his own tefillin, and in return, the soldier would have to put it on every day.

Pact sealed, Wieder called the Chabad Israel Center in Nanuet run by Rabbi Shneur Zalmen and Hodaya Haddad, where just hours later he was picking up a brand new pair of tefillin.

It was there, on video, that Aron Wieder said “We are taking it from the Rebbe’s Soldiers, to the West Point American soldiers.”