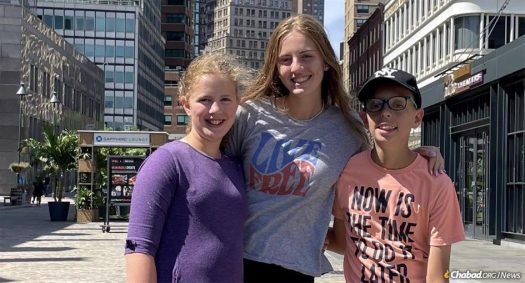 We Were in Madrid, and Everything Was Stolen From Us

About two weeks ago, on Aug. 24, my mom, my younger brother and sister, and I were flying home to Israel from New York and had a stopover for a number of hours in Madrid, Spain. Our plan was to take a nice tour around the city and even stop by a kosher pizza place for lunch—an exciting excursion for a 17-year-old like me!

We landed safely at around 8 a.m. and took a taxi to the city. The driver didn’t speak any English, so we gave him the address of the kosher pizza place, but when we pulled up, we discovered that it only opened at noon, so we decided to hop on a tour bus and then come back for lunch. Right near the pizza place, we saw a fellow Jew, a Chabad man, walking back from the morning shacharit prayers.

As Jews tend to do, we asked him a few questions about the area and he gave us directions. We walked for a while and decided to stop at a local Starbucks to get a drink and use their bathroom.

My mother paid for my coffee, put her bag down next to my sister and me, and excused herself to the bathroom. When she came out, she asked, “Avital, where’s my bag?” I, of course, wasn’t worried; I was sure she had left it in the bathroom or something. I was raised in a country where we have a lot of trust in the people around us, and the thought of someone taking the bag hadn’t even crossed my mind.

My mother looked around again for the bag and that was when it hit her—sheer panic. “Someone stole my bag! Someone stole my bag!” my mother started yelling. The reason my mother was so afraid was that all of her valuable items were in it. Eight passports (Israeli and American); two wallets with my mother’s credit cards, cash, Israeli and American IDs, driver’s license and our plane tickets; two iPhones; and jewelry, including two necklaces with very special meaning to my mother—one from her grandmother, and one with my siblings and my names engraved on it.

The moment it hit us was terrible. We’re in Madrid, far from home; we don’t speak the language, we don’t have any money on us, no passports, and a flight to catch in a few hours. As a natural response, my mother started to panic and yell; my siblings began crying; and I was trying to contact my father in Israel. “Emergency,” “answer ASAP,” “Ima’s (Mom’s) bag got stolen, and we’re stuck in Spain unless we find this bag!”

Those were the texts my father received from me. There were two women working at the Starbucks counter, and my mother begged them to help. One woman said she saw a man sitting in the corner, and he must’ve seen my mother pay for the coffee, noticed that she left the bag, picked it up, and walked out.

Apparently, it is well known that there are pickpockets in restaurants and coffee shops in Madrid, and other places that tourists go to. The first thing my mother did was call the police from the Starbucks phone but they were no use; they said we had to come to the station and they could not come to us. This may come as a shock to some people but there were three customers sitting in that Starbucks. They saw what happened, but no help was offered.

There were looks of pity for us, but I guess not enough to make a person feel the need to help. They drank their coffees as if nothing had happened. That was the moment I knew we were alone. We may have been surrounded by people, but we were completely alone in this disaster.

After realizing that the police were no use, my mother remembered the Chabad man we saw earlier that morning. I borrowed the Starbucks phone and quickly looked up the number for Chabad of Madrid.

Even on the other side of the world, G‑d was watching us, and G‑d sent us help. As the saying goes: “Even in the concealment within the concealment, even there, Hashem is surely to be found.”

The Chabad man who we had met earlier, we now discovered, is Rabbi Zalman Goldstein. He dropped whatever he was doing and came to help us. He met us near the Starbucks, calmed my mother, walked with us to his Chabad House, let us put our personal items down, and offered us food and water. He told us that the first thing we had to do was go to the Israeli embassy and get passports so that we could make the flight.

My mother felt terrible to ask this of him, but we were stuck without a penny on us. Rabbi Goldstein reached into his pocket and grabbed whatever money he had and handed it with a smile to my mother. It was €120 (about $120). He didn’t ask her name, he didn’t ask for her bank details so he could get the money back, he didn’t even ask for anything in return, he just wanted to help. That was the day I realized there are terrible people in this world who do things out of pure evil, but there are just as many, if not more, unselfish, good people in this world who do things genuinely because of their great hearts.

We arrived at the Israeli embassy after running around taking multiple taxis just to get pictures for our passports. My mother told the woman behind the desk what had happened and that we had a flight to catch in just a few hours. The woman said they could try and get us on the flight. That was great news.

But that news was followed by more fear. “That will be €164, ma’am,” the woman told my mother. My mother broke down in tears and told her we didn’t have it. We didn’t have anything. I’ve never seen my mother so helpless. It made me feel so grateful for the fact that until that moment, I never felt as If we couldn’t get something we needed because of a financial issue. I tried contacting my father, and he tried his best to transfer money to the embassy but transferring money from Israel to Spain in an hour just wasn’t possible. I then sent a text to the only person who had helped us: Rabbi Goldstein. Thirty seconds later, he responded and told me he’s on it. Two minutes later, the sum of €164 was transferred to the embassy, and we got our passports. The kindness he showed us was unbelievable. Not only did he pay and help us so much, he did it with such ease and made it seem as if it was no burden at all to him. He saved us that day.

We then went back to Chabad, and Rabbi Zalman Goldstein offered us a hot meal, drinks and a place to sit down. He even apologized for the fact that “it wasn’t enough” because his wife wasn’t home to serve us a better meal.

The rest of the day included a lot of tears, tefillot (prayers), taxi rides, a stop at the police station, encouragement, breakdowns, but most importantly, a flight back to Israel.

Without this man and his family we would have been stuck in Spain and have a lot less trust and hope in humanity. I always wondered why Chabad does what they do; in the past, I have even critiqued them, not understanding why we need Chabad in these small and stranded places of the world. I now know exactly why.

They make such a big kiddush Hashem, and take on themselves and their families such a big responsibility for reasons like this. The sages say, “In a place where there are no men, strive to be a man.” (Avot 2:5) That’s what Chabad do; they do it in places where one would think have no people who follow Hashem’s ways, and that is where they are the people. Unfortunately, I learned the hard way what it really means that “Every Jewish person is responsible for all others.”

In the Holy Land we don’t just feel pity, we don’t look at another person who is going through a hard time and just frown upon them and feel sorry for them. We feel their pain, but we then react as if it is happening to us and do whatever it takes to help our brothers and sisters.

And that is what Chabad does—whatever they can to help their brothers and sisters wherever they are. On behalf of my family—my parents, Kenny and Elana; my siblings, Zvi and Yakira; and me, Avital—I thank Rabbi Zalman Goldstein and his family with all my heart and will never forget this huge chesed (kindness) they did for us.