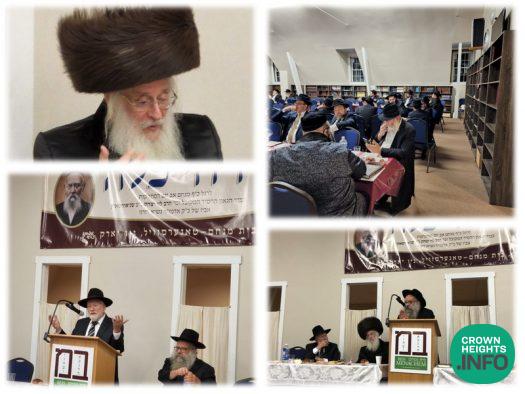 On Shabbos afternoon before mincha anash of Tannersville  N.Y. gathered in Bais Menachem for a special Kinus Torah in Honor of the upcoming Yohrzeit – Hillula of the Rebbe’s father on Chof Menachem-Av.

A large crowd of people from all walks of life gathered in Beis Menachem for the annual Yarchei Kalla – Melave Malka in honor of the Rebbe’s father’s yahrzeit.

The evening began with Dvar Malchus – special video presentation of the Rebbe followed by opening remarks from Rabbi Mordechai Stern, Rav of Bais Menachem that included the story that took place during Reb Levik’s receiving Semicha from Reb Chaim Brisker ZTZ”L regarding the Mitzva of Eiruv and the connection to Sukkah as it was explained by the Rebbe.

Rabbi Herschel Shechter, Rosh Yeshiva of Yeshiva University delivered a deep lecture on the achievements of learning all parts of the Torah including halochos that never happened and will never happen while quoting from the Alter Rebbe and giving an interesting explanation of “דרוש וקבל שכר”.

Rabbi Yehoshua Borenstein, Rabbi of Anshei Hashoron Shul of Tannersville shared thoughts about the transformation from Tisha B’Av environment to the Geula environment that begins already on Tisha B’Av after Chatzos as we are allowed to do things that were not permitted before Chatzos.

The Bostoner Rebbe shared some stories from early years and wished everyone a Kesiva Vachassima Tova for a healthy and prosperous year.

Rabbi Yisroel Rubin, head shliach of the Rebbe to North Eastern New York State, usually attends the event in person and shares with the crowd deep thoughts of Reb Levik’s teachings with very clear and practical explanations, this year Rabbi Rubin could not attend personally, may he have a speedy recovery, but he did share some beautiful ideas of Reb Levik’s Torah by sending a special Teshura to be distributed to the participants and was taught during the event by Rabbi Mordechai Stern.

Rabbi Sholom Ber Drizin the long time resident of Tannersville and supporter of Bais Menachemshared Divrei Torah on the birth of Moshiach on Tisha B’Av and interestingly connected the topic to the Gemora discussion if Perek Klal Godol regarding the argument of מהלך כעומד או לאו כעומד.