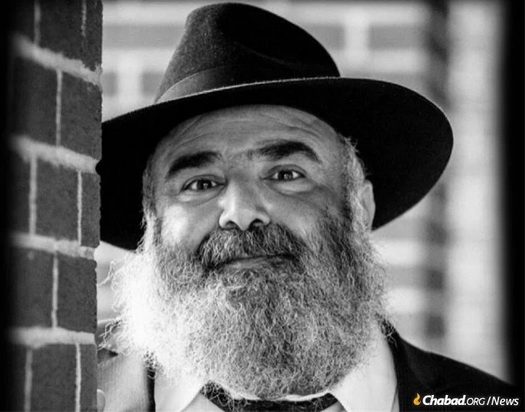 Rabbi Yisroel Rapoport was “always reaching out to others with bubbling enthusiasm and love.”

Better known as “Raps” or “Bubby” to his many friends and his admirers, Rabbi Yisroel Rapoport was remembered as a beloved rabbi who was “always reaching out to others with bubbling enthusiasm and love.” He lived his life in service of others as rabbi of Congregation Sons of Jacob in Vineland, N.J., and as co-director with his wife, Nechama, of Chabad-Lubavitch of Cumberland County. He passed away on Feb. 3 at the age of 55.

Growing up Sea Gate, a beachfront neighborhood at the southern tip of Brooklyn, N.Y., and then in the Kensington section of the borough, young Yisroel Rapoport was a charming and helpful influence at the Machzikei Hadatsynagogue in Coney Island where his parents, Rabbi Reuven and Chava Rapoport, served as the rabbi and rebbetzin. After attending local Jewish schools, he later studied at the United Lubavitcher Yeshivah on Ocean Parkway, where he graduated with honors.

After graduating from the yeshivah, the young rabbinical student was sent to serve at the fledgling Chabad Yeshivah in Los Angeles for two years 1985 to 1987. In the summer months, he would spend time visiting Jewish residents in what was then considered the more far-flung areas away from the city center—the Conejo Valley of California, miles away from Los Angeles. His colleagues, Rabbi Moshe Bryski and Rabbi Yitzchak Sapochinksy were just beginning to lay the foundations of the now-flourishing Chabad center there, and along with other friends from the yeshivah in Los Angeles, they put in significant work to get the new Chabad center off the ground.

“Yisroel’s joy was infectious wherever he would go,” recalls Rabbi Asher Vaisfiche who was with him in those California days and is now director of Chabad of Melville, Long Island, N.Y. “I recall how we were one time driving somewhere in the Valley and someone pulled up alongside us and said, ‘Shalom!’ Without missing a beat, Yisroel made a rolling motion around his own arm through the window, offering the gentleman to put on tefillin. And just like that, he pulled over, and we put on tefillin together. That was Yisroel—always reaching out to others with bubbling enthusiasm and love.”

Moving on to New Jersey

Finishing up the California chapter of his life, Rapoport made his way back to the East Coast and joined up with his brother Yaakov, who directs the Chabad at Syracuse University in Upstate New York. Bringing his unique brand of high energy and an outpouring of love, Rapoport connected with many students and was instrumental in the Chabad activities there.

At the same time, he frequented the Chabad House of another, older brother, Shmuel Dovid Rapoport, in Atlantic City, N.J., helping out with activities there as well.

When the Sons of Jacob Congregation in nearby Vineland needed a new rabbi, they reached out to Rabbi Shmuel Dovid in Atlantic City for recommendations. After a few unsuccessful auditions of other potential rabbis, the older Rapoport asked Yisroel if he was willing to try it out.

“Despite the hardships involved, despite the fact that he was still a young single man, my brother didn’t hesitate and immediately said yes,” said Rabbi Shmuel Dovid Rapoport. “The synagogue called me shortly thereafter and said that they had found their man; they absolutely loved him. And that’s where he stayed for over 30 years.”

It was during his time in Vineland that he married his wife, Nechama. Always a man with a mission, Rapoport moved back to Vineland with his new bride the day after their sheva brachot concluded, setting up, together with his family, his lifetime post.

And, of course, it’s a post his wife and children plan on continuing. “We are all very committed to carrying on his legacy,” his son Tani exclaimed passionately.

Care for the Small Town Community
Vineland is not a sprawling metropolis by any stretch, and it was Rapoport’s unique care for every individual that endeared him so greatly to his community. “He really embodied the notion of ahavat Yisrael,” Shmuel Dovid said, “for him, another person and himself were not two different things. His love for another was a special gift, something you either have or you don’t—and he definitely had it.”

This love and care expressed itself in so many ways across his work in Southern New Jersey.

“What Rabbi Rapoport did for this community in Vineland is unbelievable,” says David Beirig of Beirig Brothers, a kosher-slaughtering company in Vineland owned and operated by the Bierig family for generations, many of whom were very close with the rabbi. In fact, it was Rabbi Rapoport who officiated at David’s wedding many years back. “Anything you ever needed, Rabbi Rapoport would be there. It really wasn’t about building a big synagogue or anything like that; he simply cared for every person.”

Indeed, when Ellen Bierig, wife of Sam Bierig, passed, passed 12 years ago, Rabbi Rapoport arranged a minyan for Kaddish to be recited in the plant every day—and up until the coronavirus pandemic, that minyan had never stopped.

Rabbi Hersh Loschak, a Chabad emissary in Glassboro N.J., and Rowan University about a 25-minute ride away, is very familiar with that minyan. He recounts, “Shortly after I moved to the area in 2013, my father passed away. Naturally, I wanted to say Kaddish for my father, but there was no way I would be able to get a minyan in Glassboro on a daily basis. Reb Yisroel invited me to his daily minyan. And so I watched as each and every day, Reb Yisroel would call various community members to make sure that there were always 10 men for me to say Kaddish.

“Oftentimes, we would get there at 6:45 in the morning, and there would only be three of four of us. He wouldn’t let up, working the phone and literally waking people up to come and join the prayers. On such days, he himself wouldn’t get to pray (as he was working the phone)—only so that I can honor my father in this special way. Of course, he did all this and never asked for anything in return.”

“As a dwinding community consisting mainly of seniors, many of them Holocaust survivors, Yisroel was tasked with dealing with lots of end-of-life issues,” writes his nephew, Rabbi Avi Richler, who directs the Chabad of Gloucester County next door to Vineland. “He would call me to help him with the taharas, many times at midnight, and he taught me how to do this emotionally difficult mitzvah in the most honorable and sensitive way.”

An inevitable part of the work in his community were funerals. Officiating a funeral is difficult for any rabbi, “but he was dedicated heart and soul to offer comfort to the families and make sure that each funeral was unique and special,” says Richler.

His devotion carried over into many areas, including his work as a chaplain in many different prisons scattered throughout the area. What’s more, as the closest rabbi to many relatively remote kosher production plants, Rapoport was in close touch with many different kosher-supervising agencies, doing whatever he could to ensure the highest kosher standard wherever he visited.

As Richler put it, “Anyone who knew him knew that he literally gave a piece of his heart to everyone he met. He gave until he had nothing left for himself. This is how he lived his life, constantly thinking of others and never looking for honor or gain.”