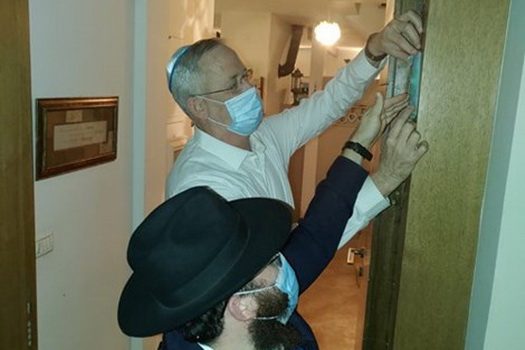 Alternate Prime Minister and Defense Minister Benny Gantz, who is taking off for a brief visit to Washington on Monday night, took advantage of the time he spent preparing for the trip to install a new mezuzah in front of his home.

Gantz set the mezuzah together with his friend Rabbi Nachum Cohen, a Chabad emissary in Rosh HaAyin.

The Minister of Defense said that setting the mezuzah is necessary in order to increase the supremacy and security of the State of Israel.

During Rosh Hashanah, Gantz heard the sound of Shofar together with Foreign Minister Gabi Ashkenazi. The Shofar blower was Rabbi Cohen, the emissary of the Lubavitcher Rebbe in Rosh HaAyin, the city in which Gantz resides.