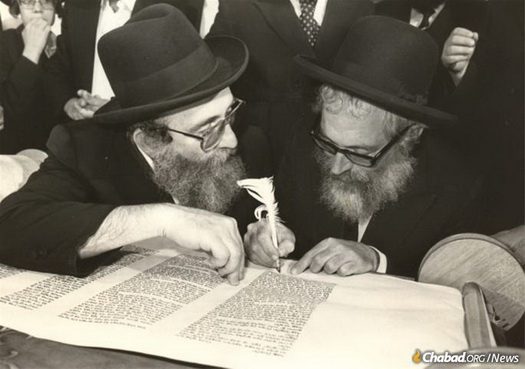 Throughout the years, Rabbi Goldberg took an active role in many Chabad projects. Here he is seen participating in the completion of the second Jewish Children's Torah Scroll.

He was a familiar sight in Jerusalem, humbly making his way to one yeshivah or another, ready to deliver a class on whatever area of Torah he was asked. Rabbi Zalman Nechemia Goldberg, who passed away on Aug. 20 at the age of 89, was a Torah scholar of the highest caliber, whose devotion to Torah transcended communal boundaries and political affiliation, teaching in institutions whose affiliation ran the gamut from Chassidic to Religious Zionist.

As a senior decisor of Jewish law (posek), he was widely regarded as one of the foremost Torah authorities of the generation. As a Torah scholar, his lucid and wide-ranging scholarship will forever be treasured in the books and essays he authored, as well as the Encyclopedia Talmudit, of which he served as editor-in-chief.

At the same time, the longtime resident of Jerusalem’s Shikun Chabad neighborhood remained eminently accessible to everyone, from the greatest rabbi to the simplest worker.

In his unassuming and matter-of-fact way, he encouraged the thousands of young rabbis he ordained, including many senior students at the Chabad Yeshivat Torat Emet near his home, to continue advancing their studies, never allowing themselves to become satisfied with what they had achieved.

“From the moment I came to his house to be tested for rabbinic ordination, it was clear to me that he had the entire Torah at his fingertips,” attests Rabbi Menachem Sabbach, today a dayan (“judge”) on the Melbourne Beth Din and spiritual leader of the North Eastern Jewish Centre in Doncaster, Australia. “After grilling me on my studies, he then sat down with me and mapped out what I would be learning over the next several years. I was very touched that a person of his greatness would take the time to train a young rabbi whom he had never met before. There were no pretenses and no barriers. Torah study, and encouraging each person to learn even more, was all that mattered to him.”

“When he would give classes at Shalavim, where I attended,” recalls Rabbi Levi Cooper, rabbi of the HaTzur VeHaTzohar Congregation in Tzur Hadassah, southwest of Jerusalem, “he would ask what we were learning and then proceed to teach without taking a moment to collect his thoughts or otherwise prepare. It was clear that he was equally comfortable teaching any topic of Torah.”

Born Into the Soviet Underground

Zalman Nechemia Goldberg was born in Minsk, now Belarus, then part of the USSR, in 1931 to Rabbi Avraham and Freidel Goldberg.

Freidel Goldberg (nee Zaichik) was a native of the city of Novardok, and Rabbi Avraham had been among the foremost students in the city’s famed yeshivah, which promoted a unique, all-encompassing but decidedly non-Chassidic approach to Divine service.

The day Zalman Nechemia was circumcised, his father was arrested by the Communist authorities and sentenced to 10 years of harsh labor in Siberia for the “crime” of leading an underground yeshivah in the Belarussian city.

A year later, after much behind-the-scenes wrangling, the sentence was commuted, and the Goldberg family was expelled to Latvia, from where they managed to immigrate in 1936 to British Mandatory Palestine.

Despite living in dire poverty, Rabbi Avraham Goldberg studied and taught Torah with devotion—an attribute that his son emulated and made his own, even as the young scholar’s health faltered.

The family’s situation was known to the sixth Rebbe—Rabbi Yosef Yitzchak Schneersohn, of righteous memory—who took an active interest in their well-being, as is evidenced by a 1944 letter, which reads (in part):

“In response to your letter, I took pleasure in hearing that your son, Zalman Nechemia, is succeeding (thank G‑d) in his studies. May G‑d strengthen him so that he continues to grow in his learning and fear of Heaven. I am sending him a gift of $25 for the purpose of bettering his health … may G‑d strengthen your health and the health of you family members and give you a good source of sustenance. … in addition to the gift for your son, I am sending an additional $25 to you my dear friend, for your personal needs.”

The Sixth Rebbe’s interest in the family can be seen from another letter later that year to the administrators of a Jerusalem social-services organization. In that letter, the Rebbe asked them to send his special regards to the elder Goldberg, who gave a Torah class on their behalf.

‘We could feel his humility’

Zalman Nechemia studied in various yeshivahs in Jerusalem, notably Knesset Israel (“Chevron”), as well as the nascent Ponevezh yeshivah in Bnei Brak, where he developed a close relationship with Rabbi Avraham Yeshaha Karelitz (the “Chazon Ish”).

The young scholar came to the attention of Rabbi Shlomo Zalman Auerbach, widely regarded as one of the premier halachic authorities of the 20th century, and a match was arranged between the budding rabbi and Rabbi Auerbach’s daughter, Rachel, in 1954.

It was told that the Goldberg family was so poor that they served sardines, saved from their government rations, at the pre-wedding Shabbat celebration.

The couple and their growing brood soon settled into the Chabad neighborhood being built on what was then the outskirts of Jerusalem, the same humble apartment they would call home for the rest of their lives.

“We children did not know how to quantify or appreciate his Torah scholarship,” recalls Rabbi Shimon Eisenbach, who grew up in the neighborhood and is today a Chabad-Lubavitch emissary in Eilat, “but we could feel his humility.”

Proficient in all areas of Jewish law, he was appointed by Chief Rabbi Isser Yehuda Unterman to lead a kollel that trained rabbinic judges under the auspices of the chief rabbinate.

With his encyclopedic knowledge, it was only natural for him to join—and eventually, lead—the team of scholars tasked with compiling the Encyclopedia Talmudit, a massive 43-volume compilation of Talmudic (and post-Talmudic) rabbinic scholarship.

Among his many duties, in the 1970s, he lectured at the Chabad kollel (institute for advanced studies) in Nachlat Har Chabad, a neighborhood founded primarily for Russian immigrants in the city of Kiryat Malachi.

After the Rebbe—Rabbi Menachem M. Schneerson, of righteous memory—in 1984 instituted a daily study cycle whereby Maimonides’ entire Yad Hachazakah of is completed on an annual basis, he eagerly took up the study and would frequently speak at the celebrations marking the completion of one cycle and the beginning of the next.

“Every week I would speak to him by phone, bringing him queries from Chabad rabbis and rabbinical judges from all over Israel and beyond,” says Rabbi Tuvia Zilbershtrom, rabbi of Shikun Chabad. “He had a ready answer, based on sound Talmudic basis, for every question posed.”

Throughout the years, Rabbi Goldberg took an active role in many Chabad projects—ranging from lobbying that Jewish identity be defined according to halachah (Jewish law) to attending the celebrations following the completion of the children’s Torah scrolls.

“He was a genius Torah learning and with a fine, kind demeanor,” says Rabbi Zilbershtrom, “a world-class scholar and the paradigm of humility and simplicity.”

He is survived by his wife, Rachel, and by their children and grandchildren.