« Deadline To Sign Up For Save-A-Life Blood and Plasma Drive is Today
Weekly Story: Gan Yisroel » 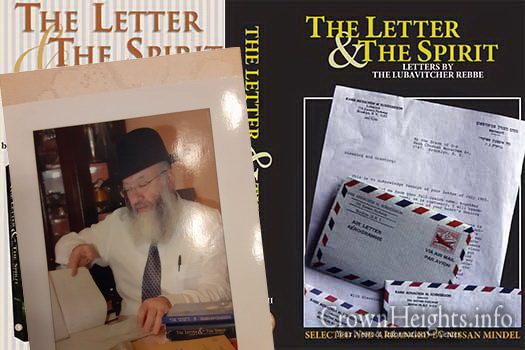 Below is an interview with the director of NMP (Nissan Mindel Publications), Rabbi Shalom Ber Schapiro:

Q: What is “The Letter and the Spirit”?
A: It is a collection of the Rebbe’s English correspondence in ten volumes – four of which have been published to date with Volume 5 now going to print b’h.

Q: What is unique about this collection of the Rebbe’s English letters?
A: Firstly – the uniqueness of the English letters of the Rebbe, in general, is that the Rebbe wrote these letters originally in English – not that he wrote them in Yiddish or Lashon Kodesh and then had them translated. The Rebbe wrote these letters in English – the language of the people. Just as the Rambam had written some of his works in the language of the people of his time, Arabic. This in itself is quite unusual and unique.
Secondly – the uniqueness of this particular collection, The Letter and the Spirit, is that it is the only collection of the Rebbe’s letters which has the distinction of having been prepared by Rabbi Nissan Mindel himself – the personal secretary of the Rebbe – who was responsible for the Rebbe’s correspondence for over four decades of the Rebbe’s leadership. He was therefore intimately familiar with the process by which the letters were written and with the letters themselves – and was amply qualified to prepare the letters for publication in his unique and professional way. He had a copy of all the Rebbe’s letters – so having access to all of them, he could better make selections

Q: Did Rabbi Mindel consult with the Rebbe about his project?
A: Yes, and he received the Rebbe’s enthusiastic blessing for it.

Q: What criteria did Rabbi Mindel use in choosing the letters?
A: He chose only English letters, since English is the universal language and the letters would reach more people this way. The Rebbe’s letters were written in Yiddish, Hebrew and Russian as well – all prepared by Rabbi Mindel.

He chose those letters which he felt could serve as a lesson and a guide to many people, not only to the individual it was addressed to.

Q: What is it about this collection that reflects Rabbi Mindel’s unique talents?
A: As with all his well-known and popular works – The Letter and the Spirit was done with his trademark thoroughness and his clear, concise style. Very user friendly.

Q: Can you give examples?
A: Here are some –

1.The General Introduction he wrote (included in every volume) – describes in fascinating detail the process by which the Rebbe’s correspondence was done and gives an overview of the Rebbe’s leadership and how it is reflected in his letters. This introduction is a study in itself.

2. He carefully selected the letters and categorized them into topics and in chronological order as well.

3. He also wrote “Highlights” for each topic– in which he gives the reader insight into the letters in that section.

4. In addition – each section has a Table of Contents listing every letter and a brief synopsis of each letter.

Q: What topics are in Volume 5?
A: Family, Lubavitch Derech, Perplexed, Holy Land, Concepts, Education and Halacha.
More topics, in other volumes include – Health and Medicine, Torah and Science, Communal and Political Issues, Miscellaneous, Women. Volumes can have anywhere from three to seven sections.

Q: Can you share some feedback?
A: 1. Shluchim tell us how useful and invaluable these volumes are. Not only for giving advice and guidance to their communities but also in using them as texts for regular classes which they teach.

2. Letters of the Rebbe are a study and an interesting source of chassidus. As Rabbi Mindel would tell us: “When I came in to the Rebbe’s room a few times a week for dictation – it was like listening to miniature sichos.” The Rebbe would distill and condense concepts in chassidus and use these in a most practical, clear and precise way to answer and guide those seeking his advice.

3. The principal of a girls’ school was using the General Introduction in a course they were teaching.

« Deadline To Sign Up For Save-A-Life Blood and Plasma Drive is Today
Weekly Story: Gan Yisroel »