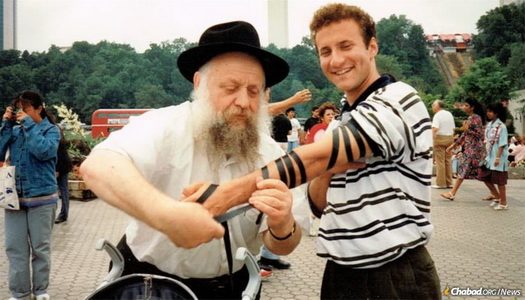 Yosef Bentzion Raices was a joyful exponent of Judaism who wanted nothing more than to share a Torah thought and assist someone in performing a mitzvah.

He could be seen chugging along the bumpy backroads of Upstate New York in an old school bus that had been converted into a makeshift library. Speaking in his Russian- and Yiddish-accented broken English, Yosef Bentzion Raices, who passed away May 9 at the age of 91, was a joyful exponent of Judaism who wanted nothing more than to share a Torah thought and assist someone in performing a mitzvah.

Emblazoned with the word Ufaratzta(“And you shall spread out”), the bus was the forerunner of the now ubiquitous mitzvah tanks that can now be found from Miami to Moscow and from Jerusalem to New Jersey.

A first-grade teacher for more than 50 years, Raices drove the bus, dubbed the “Merkos Bus,” every summer from the early 1960s until it met its end in an accident in the summer of 1968. But Raices, who made his bones in the Chabad-Lubavitch underground in Stalin-era Soviet Union, was not one to be deterred. He continued to make his rounds to camps, bungalow colonies and hotels all over the Borscht Belt in his personal car and then a van for decades.

He was born on Aug. 25, 1928, to Rabbi Shmuel Yitzchak (“Rashi”) and Alta Yehudis Raices in the Belarussian village of Puchavitch (Pukhovichi), where his father served as shochet. R’ Shmuel Yitzchak had been a student in the original Yeshivat Tomchei Temimim in the village of Lubavitch, and the family was deeply entrenched in the underground network of Chabad institutions that flourished at the time.

It was difficult to be the only child dedicated to Judaism in the entire village, as the other children would torment him and mock his old-fashioned practices. “Hey shochetil,” children would taunt, in reference to his father’s position, “mach a broche! [make a blessing!].” Things were so bad that his parents considered sending him to British Mandatory Palestine with an elderly couple who had secured visas. The plan never materialized, but the fact that his parents were willing to say goodbye to their young son forever is indicative of the degree of desperate determination they felt.

But the persecution in the village remained relentless. In the mid-1930s R’ Shmuel Yitzchak sent a letter to the Sixth Rebbe—Rabbi Yosef Yitzchak Schneersohn, of righteous memory, who was by then living abroad—who responded that the Raices family should move closer to Moscow, whose massive size was a safer fit for a religious family. For a time they lived quietly together with a small group of Chabad Chassidim in the town of Yegoryevsk, four hours away from Moscow, until suddenly Chassidim started to get arrested one by one.

Young Yosef Bentzion would later recall that it was his sisters who helped save the community. One day at the height of the arrests, the two girls went to the post office where they recognized a Jewish man requesting addresses of various Chassidic families in Yegoryevsk. Realizing that this man was in fact a government informant, they ran home and sounded the alarm, and in a short span the Chabad Chassidim who had thus far avoided arrest absconded from town. The community soon reconstituted in Kashira, a similarly anonymous town in the Moscow region, where they would discreetly remain until the next crisis forced them to move again.

Already as a child Yosef Bentzion was educated in the underground Chabad yeshivahs, which moved from city to city in a never-ending effort to ward off the unwanted attention of the NKVD, the Soviet Union’s secret police. Throughout his tumultuous journey, including fleeing to Samarkand in Soviet Uzbekistan to escape the advancing Nazis, he continued to study Torah. Inspired by a coded letter smuggled into the Soviet Union from the Sixth Rebbe, he committed large tracts of Tanya to memory.

A secret letter from the Sixth Lubavitcher Rebbe to R’ Shmuel Yitzchak Raices from the mid-1930s about maintaining Jewish observance amidst Soviet oppression.

The war years in Samarkand were filled with hunger and malnourishment, and even as a boy Yosef Bentzion attempted to help the family stay afloat however he could. At one point he sold scrap paper for rolling cigarettes, an endeavor that earned him a brief arrest by a Soviet policeman for the crime of “speculating.”

After the conclusion of World War II, the Raices family joined the wave of Chabad families who took advantage of the temporary parting of the Iron Curtain and left the country posing as Polish refugees.

Finally free of Soviet rule, he was able to correspond freely with the Rebbe, whom he had never met in person, but whose teachings and example inspired him and shaped his life.

In 1950, Rabbi Yosef Yitzchak passed away. Despite the pain of such a loss, he was comforted in the knowledge that the Sixth Rebbe was succeeded by his son-in-law the Rebbe—Rabbi Menachem M. Schneerson, of righteous memory—whom the Chassidim had recognized as a most fitting successor.

Later that year, on the springtime holiday of Lag BaOmer, he came to New York and enrolled in the central Chabad yeshivah in Brooklyn, where he studied alongside American-born peers.

At that period, the Seventh Rebbe encouraged everyone to draw at least 10 Jewish people closer to Judaism as a tribute to his predecessor.

Understandably, Raices assumed the Rebbe was referring to others, who had wider circles of friends and acquaintances—not a recent arrival from Europe, who possessed almost no English and rarely left the yeshivah.

Following the talk, Raices stood in line to present the Rebbe with his pahn, a paper requesting a blessing. When his turn arrived, the Rebbe turned to him and said: “Raices, I probably don’t need to remind you about the 10 Jews.”

“Which 10 Jews?” replied the young man in confusion.

In response to his query as to where he was to find 10 people to influence, the Rebbe told him to find them in “the street.”

The following morning, Raices strolled onto Eastern Parkway and approached strangers in Yiddish, looking for someone to inspire. He thus met a man who spoke the language. They struck up a conversation, and the man invited him to meet his family in their posh apartment near the Brooklyn Museum. There, the young man helped his new friend put on tefillin and taught his young daughter how to wash negel vasser every morning.

By Divine providence, the day of their meeting was the yahrtzeit (anniversary of passing) of the man’s father.

In the end, he inspired not 10 people, as per the Rebbe’s original request, but 13.

This was to become a guiding principle in his life. The Rebbe’s calls to action were directed to him; he had the wherewithal to change people’s lives, as he did for the rest of his 91 years.

One Yom Kippur, he decided to stay overnight in the synagogue at the Lubavitch World Headquarters. After saying Psalms into the night, he lay down to sleep on a bench. He suddenly sensed that the Rebbe was approaching and immediately stood up. “On Yom Kippur,” the Rebbe told him with concern, “you must see to it that you are well rested.”

As a student, he taught Tanya to a group of students in the Mir yeshivah and regularly walked to neighborhood synagogues on Shabbat afternoon to teach Chassidic discourses to the assembled. Once, the Rebbe questioned him about these visits, taking an active interest in the questions posed to him and how he answered.

Although his English was lacking, his sincerity and love was apparent to all who met him, which would perhaps explain why he was selected to spread Judaism on campus at Harvard University, decades before the word Chabad House was coined.

In 1955, he married Nechama Rochel Pshemish, who was born to a family of devoted Belzer chassidim, and who had survived the Holocaust in Siberia.

Together, the Raices built their home in the Brownsville and then Crown Heights neighborhoods of Brooklyn, where the young rabbi began teaching elementary students, first at Educational Institute Oholei Torah, then Ohr Yisroel and finally at United Lubavitcher Yeshivoth, where he would go on to educate successive generations of Chassidim.

Since he did not teach during the summer, he took to driving the Merkos Bus during his time off. The bus was neither a hobby nor a source of side income. Raices saw it as a holy mission—his part in fulfilling the Rebbe’s directive to spread Jewish pride and observance to as many Jews as possible. The stated purpose of the bus was to disseminate books and educational materials. But he used every interaction—from his regular stops to his not-infrequent flat tires—to reach out and influence others.

In fact, he kept up his connection with the people he met throughout the year, sending them shmurah matzah before Passover and encouraging them to grow in their Jewish observance.

As many residents of Crown Heights can attest, he lived with the fervent hope that Moshiach would arrive at any moment—a belief that influenced his every move and inspired his every day.